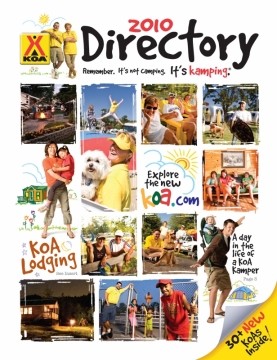 Professional photography taken in the fall of 2009 at three Kampgrounds of America (KOA) parks in Michigan is being featured in the 2010 edition of the annual KOA Directory.

More than 1 million copies of the directory are currently being distributed to KOA campgrounds and campers across the U.S. and Canada, according to a news release.

“We decided to do our professional photo shoot at Emmett, Flint and Port Huron because we knew they are beautiful campgrounds, and would truly represent the best of the KOA system,” said Lorne Armer, vice president of marketing for Kampgrounds of America Inc.

The Emmett KOA, owned by Chris and Deborah Pietras,  has photographs displayed on the cover of the directory, as well as several other pages in the 245-page directory. The annual KOA Directory carries complete listings and maps for the more than 475 KOA campgrounds in North America.

The Holly/Flint KOA is owned by Wynn Taylor, and the Port Huron KOA is owned and operated by Shirley and Howard Stein.

The three parks are located north of the metro Detroit area.

The photographs, taken by professional photographer Jeff Dow, will also be used in other materials KOA distributes to its campers.

For more information on Kampgrounds of America, go to www.koa.com. To view other photographs by Jeff Dow, go to www.jeffdow.com.