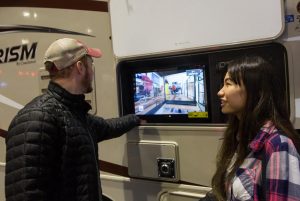 Jesse Coffman, left, and Susie Coffman look at RVs on Thursday. The RV industry is pivoting toward younger customers like the Coffmans.

They don’t look like RVers. Jesse Coffman and Susie Coffman are young. No gray hairs. And not retired. Jesse is 29. Susie, 25. The couple recently moved from Texas to Lewiston, Wash.

But on Thursday, they were on the hunt for an RV at the Inland Northwest RV Show and Sale, according to The Spokesman-Review.

“It’s important for us to travel and see the world,” Jesse said.

“But comfortably, too,” Susie said.

It’s these values – expressed by younger buyers like the Coffmans – that the RV and camping industries are increasingly pivoting toward. Younger americans are hitting the road in search of adventure, but still desiring the comforts of home. RV manufactures and campgrounds have complied, adding fancier gadgets and more luxurious quarters.

“We just finished up our sixth record year in a row of both camper night and revenue growth,” said Mike Gast, vice president of communications for Kampgrounds of America (KOA), the largest franchiser of campgrounds in North America, with more than 500 campgrounds in the KOA system.

Eighty percent of the roughly one million families that spent a night at a KOA last year came in an RV, Gast said. Those who still sleep in a tent expect more comfort and more amenities.

“Whatever level of comfort the camper is after, and (if there) proves to be a market, we’ll try and provide it to them,” Gast said.

RV dealers and manufactures have pivoted toward the younger, weekend warrior demographic by creating lighter, cheaper RVs and campers.

Jackie Butler, a saleswoman for nüCamp, was at the RV show on Thursday. She stood in front of a tear-shaped camper trailer that weighted just more than 1,000 pounds.

“I can’t even say there is a (customer) demographic anymore,” she said. “It’s just the minimalist lifestyle.”

The smaller campers have “everything you need to go camping,” she said.

The carpet is designed to get wet. In fact, it’s modeled after the carpets yachts have. The windows are made of durable plastic.

“It’s made for people who are really going to do something,” she said.

The marketing materials for nüCamp and others draw heavily on depictions of adventurous independence while simultaneously peddling comfort. A glossy nüCamp pamphlet handed out by Butler featured Henry David Thoreau quotes alongside pictures of gleaming bathrooms, queen–size beds and wall–mounted televisions.

“It really has opened up the lifestyle to a completely new demographic of young families,” Gast said.