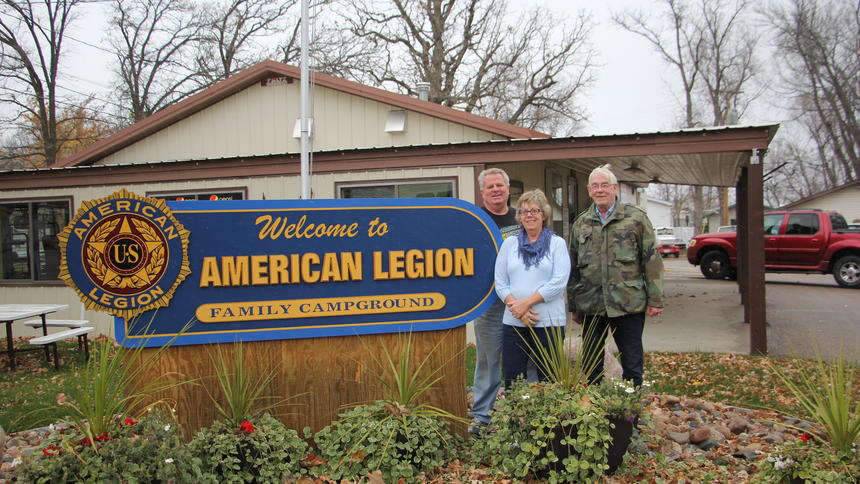 American Legion Campground managers Dean and Karen Miller and Legion official Dave Coalwell stand at the entrance to the grounds in 2017.
Resorts and campgrounds, a heavy portion of the Minnesota’s tourism allure, are vanishing one by one from lakeshores all across the state, according to the West Central Tribune.

According to data from Explore Minnesota Tourism, the state has lost 317 resorts and 191 private campgrounds over the last 16 years. In Becker County, there are 62 resorts, down six from 2012.

Changing customer tastes, competing attractions, and growing regulations make this a challenging time for the resort and campground industry. That, coupled with the increasing price of lakeshore property, means it’s becoming more and more appealing for owners to sell, a challenge for cities and counties that rely on the tourism revenue brought in by those vanishing resorters.

Everything but the kitchen sink

The resort and camping industry has changed, just in the last five or 10 years. With each new spec added to campers and RVs and the demand for Wi-Fi, people flocking to the lake for the weekend have higher expectations for their quaint campgrounds.

“If you don’t got Wi-Fi, you’re nothing right now,” said Dean Miller, manager of Legion Campground in Detroit Lakes.

Miller says he knows of campgrounds that have spent millions to install Wi-Fi. It’s a costly upgrade to cover a large campground with adequate Internet access, with an antenna every 100 feet.

Over at Fair Hills Resort, owner and operator Beth Schupp says they spent thousands to run Internet cable through their resort.

“We did it, and it’s never enough,” Schupp said. “If we have two people that are staying here, and we have 75 staff members all wanting to be on it with not just one device, two devices, often three …. It’s tough to have Wi-Fi for all those people.”

It’s more than just putting in Wi-Fi, though. Resorts and campgrounds, which often are located outside of cities, as part of their allure used to be to “get away from it all,” have high upgrade costs in other infrastructure areas, too.

“Now, we’re getting 40-footers with triple slideouts. It’s not even ‘glamping,’” Miller said of the “glamorous camping” trend. “It used to be good enough to have a 110 plug in, then a 30-amp. Now, everybody needs 50-amp.”