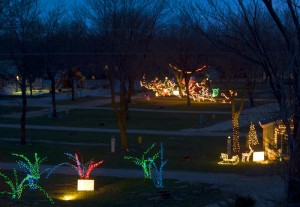 Some of the lighted scenes in the Yogi Bear’s Jellystone Park in Austin, Minn. Photo courtesy of the Austin Post-Bulletin.

The weekend after Thanksgiving has become the official kickoff for the Christmas season, and Austin, Minn., had plenty to offer. One family in particular has started a tradition with the Austin Festival of Lights, which opened for the second year at Yogi Bear’s Jellystone Park on Friday, the Austin Post-Bulletin reported.

It started when Kiersten Hall and her family went on a drive a few years ago to look at neighborhoods decorated with Christmas lights and ended up going home after only 20 minutes. Hall was disappointed to find that her memories of entire blocks lit up with holiday cheer were just that.

“There was nothing to look at,” Hall said. It was on the ride home that Hall and her family talked about the elaborate displays they had seen in North Dakota and Illinois, and they decided they would try to start something similar in Austin.

“Christmas is so great and fantastic when you’re a kid,” said Hall, who wanted to bring that back for area children and the child in herself.

Hall organized it, and local businesses and organizations came on board, sponsoring displays that create a road trip through a sparkling campground. She estimated there are about 200 displays, with 86 being furnished by her family. Bad weather and the Thanksgiving holiday prevented completion of the full display before the first weekend, but Hall said more is being added over the next week or so.

“Three more businesses by the end of the week,” Hall said. “Then over the course of time, I still have things in hiding that I will put up.”

Waiting at the gate Sunday night for the campground to open were Maureen Steenblock and her husband, Charles. Steenblock said she had not been to the light show before but had read about it.

“This seemed like a fun thing to do to start some of the holiday festivities,” said Steenblock, who had a few favorite displays. “I liked a lot of them. I think my favorite one was the snow globe one.

It was very large, and it took some level of creativity.”

Steenblock, like every visitor to the festival, got to vote for her favorite display. Not only will the display with the most votes win, but voters also will have their name in a drawing for a vacation package at The Lodge on Ottertail Lake.

Hall said kids will enjoy Sundays as Santa greets cars and hands out candy canes, and Thursdays when the first 200 children will get a goodie bag. But Hall is expecting kids will get more out of the experience of going than any giveaways.