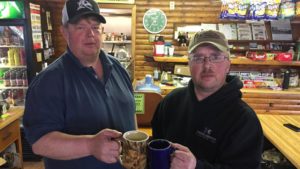 Jeff Randall, left, and Jason Randall continue a family endeavor that their grandfather Hosea started in 1928.

An abundance of wildlife and fish attracted Hosea Randall to the shores of Minnesota’s Lac qui Parle Lake.

A commercial hunter, trapper and fisher, Randall harvested waterfowl and fish and packed them in barrels which he shipped by rail to fine restaurants in Chicago and New York, according to the West Central Tribune.

And sometime in 1928, as far as his grandson Jeff Randall can tell, Hosea opened up what today is known as the Milan Beach Resort.

It was originally on the west side of the lake. One winter the building was sawed in half and, with horses and logs, hauled across the ice to its current location near the Milan Bridge on the east shore, according to Randall.

“Best steak on the lake” is among the advertisements that the third-generation Randalls use to lure people to the shores of Lac qui Parle Lake these days.

All of these years later, the Milan Beach Resort remains a family-owned and operated business. Jeff Randall and his wife, Stephanie, and his brother, Jason Randall, own and operate the resort.

Just a few years ago they expanded its campground and built a brand new kitchen and bait shop room, and remodeled the bathrooms and other areas.

“We tried to keep the old atmosphere in the public part of the cafe,” said Jeff Randall of the remodeling project. The resort’s knotty pine interior, and walls sporting the mounts of trophy deer and walleye, continue to provide its original, traditional feel. 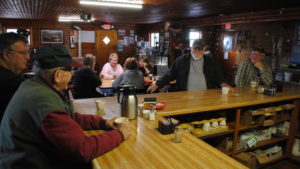 The coffee is always on at the Milan Beach Resort and local patrons gather every morning to trade barbs and news.

Tradition is important here, he said. His local customers hold strong to their Scandinavian heritage, he explained, and are none too adventurous when it comes to the menu. Fresh walleye, tender steaks and chicken dinners remain the favorites.

The two brothers grew up in the business. Jason stayed with it all these years. Jeff left to work as a chef in Alaska and did a 24-year stint as a funeral home director before he returned to the business after the death of their mother, Jane, in 2013 at age 68.

All of the 42 miles of shoreline on the lengthy lake — part of the Minnesota River — are undeveloped and protected as part of the Lac qui Parle Wildlife Management Area. The resort and its campground represent the only commercial development on the lake.

The Lac qui Parle State Park is a neighbor to the resort and it hosts visitors from all around the state and beyond.