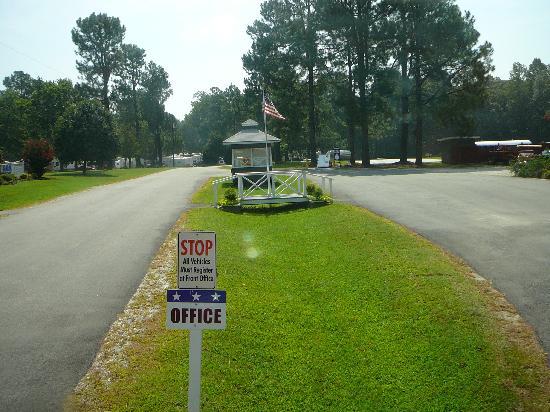 Clarence “Doc” Jones bought his first recreational vehicle 15 years ago because he was angry.

“True story,” laughed the vice president of the Virginia Camping Cardinals, 120 members who will roll in 50 RVs to American Heritage Campground in Williamsburg, Va., today (April 27) for a weekend rally. It’s the largest club of its kind on the East Coast, with primarily minority families.

Jones runs a salvage business in Claremont, in Surry. He recalled the day he bought the rig at a salvage auction.

“I had won several bids, and after winning another, one of the other bidders said, ‘Doc, I figured you’d be broke by now.’ That made me mad. The auctioneer told us he had two more vehicles for bid. One was a Lexus and the other an RV. I decided I was going to buy them both just to prove I wasn’t broke.”

The RV was barely a year old but had suffered light fire damage when the ceiling air conditioner malfunctioned. “I took it home, cleaned it up and replaced the air conditioner,” Jones noted. “Then I told my wife that on our next vacation we were going camping.”

With that, they were hooked. The details vary, but the allure is the same across a club that enjoys the outdoors.

“It is very relaxing,” said club member Julia Perry of Chesapeake. She began RVing in 1967.

She captured the perspective. “You learn a lot about yourself. You learn to enjoy life without all the comforts of home. And you enjoy meeting people. Everywhere we go, we meet people who are interesting and inspirational.”

“We hunt,” explained Marian Hartman of Hampton, who with her husband bought their first RV in 1993. “We’d go to the clubhouse at the end of the day, but I was the only woman so we couldn’t spend the night.”

In York County, James Jordan and his family were headed to Montreal in 1967 when they drove past an RV park. He told his wife, “Our next vacation we’re going in one of those.” Christine Jordan stipulated, “As long as I don’t have to sleep on the ground.”

The families enjoyed the camaraderie of other campers, to a point. “The first 10 years we RVed we never saw another black person camping,” Perry said. “And that included two cross-country trips.”

One time the Perrys met a family of black campers from Ohio. They discovered they traveled to many of the same places at the same time but stayed in different campgrounds. They started to network with other campers and eventually organized the club. In the early 1990s, the Perrys became charter members of the National African-American RVers Association.

Jones found his way to the national association in 2002 through an acquaintance. “He told me he had been at Bethpage Campground in Urbanna, and said there were ‘a thousand campers there.’” Next came the kicker: “And most of them were black!”

Jones told his wife, Bernetta, and the couple drove to the campground to see for themselves. “She walked right up to people and started talking,” he recalled. “She’s nosy.”

Camping has expanded among the black community. In the national association’s first decade, it went from 52 rigs to more than 600 at the 1999 national rally in Atlanta.

Nationwide, however, relatively few blacks go camping in RVs. In a speech to the Texas Association of Campground Owners (TACO), Larry Brownfield, a development consultant for KOA Campgrounds, said, “We’ve got to be aggressively targeting ethnic diversity.”

He cited 2010 Census data noting that whites make up just 66% of the U.S. population, yet a 2009 Outdoor Foundation survey said whites account for 87% of American campers. “It’s a wakeup call for us.”

“We’re on our ninth RV,” said Julia Perry, adding that with each one, the accompanying vehicle matched the color scheme on the camper. That included a shiny silver Suburban to pull the Airstream they once owned. They have made nine cross-country trips and camped in every state except Hawaii, tooling around today in a 41-foot Monaco RV.

Jones recalled the time he took a trip to Florida and came home with two RVs.

“Bernetta saw one that had a bathroom-and-a-half. We only had one bathroom, and you know what they say when a woman’s not happy.”

The Hartmans used the new RV to ferry their family and follow two great-nieces to AAU basketball games up and down the East Coast. “They’re grown, and now the oldest is coaching an AAU team, so we’re right back at games,” Marian said.

Many campers start in tents and work their way up to pop-ups, towables and finally full-sized rigs. James Jordan skipped the first step. “I had enough of tents when I was in the military.”

The Virginia Camping Cardinals has an altruistic side. Each rally ends with a church service. An offering taken during the hour is donated to a local nonprofit that serves the African-American community.