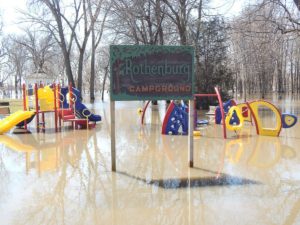 The swollen Cottonwood River raced through Springfield, Mo., in its usual channel and surged into Rothenburg Campground Wednesday (April 25), according to The Journal.

“We’ve been watching the river lately,” Skaret said. “On Monday, we plugged storm sewers that empty into the river to reduce back-up. We checked our sanitary sewers and found them secure.”

Skaret said the dike just east of the community center was reinforced with earth and clay in 2012.

“It’s very strong. It has held up very well,” he said.

“A fishing pier at Salonek’s Pit will need repair,” Skaret said. “We’ll have a lot of clean-up work to do, raking up mud. But overall, I think we feel pretty fortunate. We’ve got an experienced city park, street and utility staff that has been through this before.”