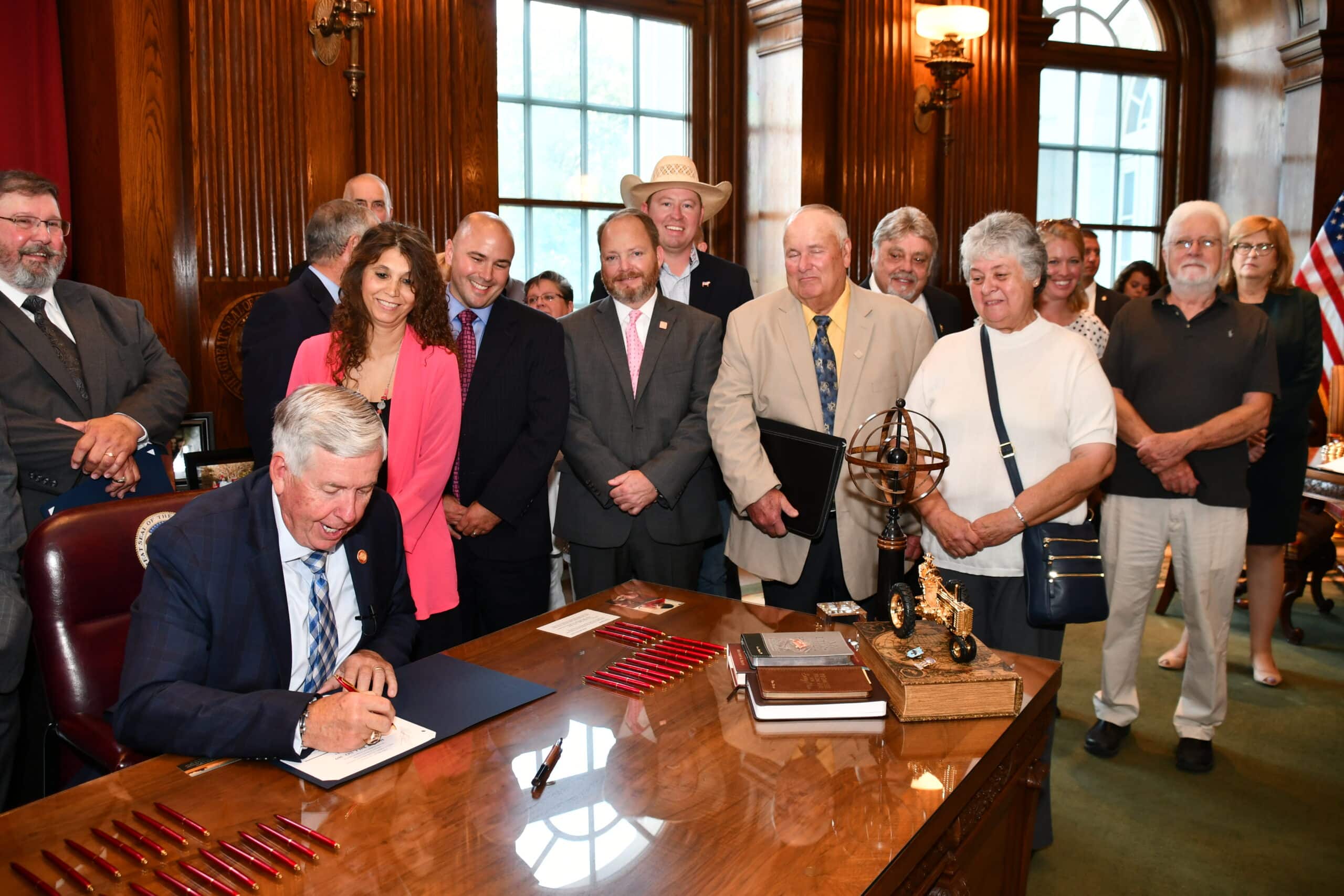 The Missouri Association of RV Parks and Campgrounds (MOARC) and the National  Association of RV Parks and Campgrounds (ARVC) are proud to have partnered to support the signing of  House Bill 369, an Inherent Risk Bill, in Missouri, and on Wednesday (July 14) the bill was signed into law by Missouri Governor Mike Parson, according to a press release from ARVC.

The bill specifically offers owners, operators and employees of campgrounds and RV parks protection from frivolous lawsuits when an injury or death occurs as a result of an inherent risk of camping. The bill does not shield a campground or its employees when injuries result from willful or wanton disregard for safety and clearly outlines the types of warning signs that operators are required to post.

MOARC Executive Director Larry Helms and lobbyist Kyna Iman were instrumental in getting the bill passed. wWrking with Jeff Sims, ARVC’s senior director of state relations and program advocacy. ARVC supplied MOARC with the model language for the bill that was then amended as it went through the process. ARVC and MOARC leaders also testified before the Senate Committee and negotiated with the trial attorneys and insurance associations, reaching a compromise on wording that alleviated possible opposition, adding an exception if a park “fails to use that degree of care that an ordinarily careful and prudent person would use under the same or similar circumstances.”

“This is industry unity at its best! It is a big win for our industry and shows the strength of state organizations and ARVC working together,” said Paul Bambei, ARVC president and CEO. “This bill is an extremely important piece of legislation for our industry and it couldn’t have happened without the hard work of everyone involved. I want to especially thank Larry Helms for leading this campaign for  the campground owners in Missouri, Kyna Iman for her insightful lobbying efforts and our own Jeff Sims for his tireless effort to bring this legislation to fruition.”

The inherent risk bill was a long-time coming, as Rep. Brad Hudson (House Bill 1070), Rep. Chris Dinkins  (House Bill 72) and Senator Justin Brown (Senate Bill 50) all made initial efforts to get the bill onto the floor for a vote, but faced challenges getting the bill out of committee. Iman’s efforts were especially important at this juncture, as she was able to make an 11th-hour arrangement with Rep. Tim Taylor to offer the bill as an amendment to MO H 369, which then passed the House by a vote of 150-1.

“I see using our joint team approach in getting the Missouri Campground Inherent Risk Legislation signed into law represents the best of what MOARC and ARVC are about and highlights the true meaning of member advocacy,” explained Helms. “The inherent risk legislation is as an important tool to reduce frivolous lawsuits for campgrounds. I applaud Gov. Parson for signing HB 369 and appreciate the  leadership of ARVC’s Jeff Sims, MOARC lobbyist Kyna Iman and Representative Tim Taylor and Senator Mike Bernskoetter for their hard work on getting this monumental legislation across the finish line.”

Wisconsin was the first state to pass an inherent risk bill in 2016, thanks to a coordinated effort by the Wisconsin Association of Campground Owners (WACO) and attorney Mark Hazelbaker, who shepherded the bill to passage. That bill has served as a guide for other states looking to pass similar legislation. Not only is this Missouri inherent risk bill another victory for the industry, but Hazelbaker says that the passage of this Missouri bill should provide a new model to allow more states to introduce similar legislation.

“Thanks to the efforts by MOARC and ARVC, Missouri built on the law Wisconsin passed in 2016 to enact the best liability legislation in the US,” says Hazelbaker.

“This is such a great bill for our industry,” says Sims. “The language of the bill can serve as a template and the process we undertook can serve as a guide on how to overcome challenges and make compromises to reach an overwhelming majority of support.”

Other ongoing ARVC advocacy efforts include several guest ejection/removal bills in various stages in (Maine (ME S 268) and South Carolina (SC H 3765) in further attempts to pass common-sense regulations to protect members of our industry.

ARVC also supported the Indiana Manufactured Housing Association-Recreation Vehicle Indiana Council (IMHA-RVIC) through the passage of IN S17, the Campground Matters bill, which specifically defines the term Campground, Campground Owner and Guest and defines specific circumstances when a campground owner may ask that an individual leave a campground and specifies that an individual who does not leave or returns is guilty of criminal trespass.

On behalf of ARVC, Sims’ advocacy efforts were instrumental in incorporating into the NFPA 1194 Standard for Recreational Vehicle Parks and Campgrounds – Annex D Operations Guidelines, which are not part of the requirements but does provide definitions/guidance for Transient Guest and Guest Removal/Ejection.

“ARVC and our state associations are always looking out for our members, monitoring legislation at the local, state and national levels. We are working to create legislation to better our industry and on the lookout for legislation that could have negative effects. We have monitored more than 13,000 bills so far in 2021, making it our busiest year ever, but we will continue to stay proactive and vigilant,” said Sims.

The inherent risk section of the bill states:

“This bill prohibits an owner, employee, or officer of a private campground from being liable for acts related to camping at a private campground if the injury or damage occurred as a result of an inherent risk of camping, as described within the bill. This bill does not apply to actions arising under Missouri  Workers’ Compensation Law. Additionally, this bill does not prevent or limit the liability of an owner,  employee, or officer who intentionally causes injury, death, or damage, who acts with a willful or wanton disregard for the safety of the person or property damaged, who fails to use the degree of care that an ordinarily careful and prudent person would use under the circumstances, or who fails to conspicuously post warning signs of known dangerous conditions on the property. Warning signs are required to appear in black letters of at least one inch in height on a white background. Warning signs  and written contracts entered into by an owner, employee, or officer shall contain a warning notice, as  specified in the bill.”

You can view the full content of the bill here: Bill Resource (statenet.com)

Learn more about ARVC’s advocacy efforts at on its Advocacy page, including links to current advocacy campaigns, updates on current legislation affecting the outdoor hospitality industry and current recalls.  You may also contact the ARVC Advocacy team if you have questions, need advocacy support or would like to get involved with our efforts.

To learn more about starting the legislative process to pass inherent risk legislation in your state, contact Jeff Sims at [email protected]