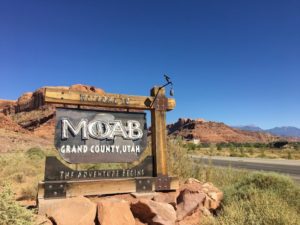 Millions of visitors flock to Moab, Utah, every year, prompting the city to push the pause button on new commercial lodging construction. Local property owners are angry and state legislators are concerned.

The move by elected leaders in Moab, Utah, to halt new commercial lodging construction in this overwhelmed tourist hot spot has enraged some property owners and raised alarms in the state Capitol, according to The Salt Lake Tribune.

Niehaus told The Tribune her message was basically, “We’re getting organized.”

Local leaders fear the governor or lawmakers could step in with legislation to restrict municipal zoning and regulatory powers. There has been some discussion of that, but legislative leaders now assure that they are content to leave it up to locals to solve their issues.

“I’m not sure whether there will be legislation or not,” Senate President Stuart Adams told The Salt Lake Tribune in an interview last week , adding that he is optimistic there won’t be a need for legislative intervention.

Adams said he heard concerns coming from landowners, legislators and others, and that in the case of at least one hotel project, developers “had bought property and expended a considerable amount of money to try and work on a project and then the moratorium went on and then their land use was changed,” Adams said.

On the doorsteps of Arches and Canyonlands national parks, Moab, with a permanent population of about 5,000, draws millions of tourists. During its busiest weekends “No Vacancy” signs illuminate the entrances to RV parks and motel clerks turn visitors away by the dozens. Grand County estimates there are about 4,500 short-term and nightly rental units on the market, and Airbnb reported a record-breaking 36,600 visitors to Grand County this summer, third highest in the state.

Earlier this year Moab and Grand County decided something was going to give, so they decided to hit pause to give them the chance to figure out how to guide more sensible growth in the future.

In February, the city and county councils separately imposed moratoriums on new hotels and motels and other overnight lodging. Then in July, the councils amended zoning laws to remove overnight accommodations as a land-use right.

While existing commercial businesses are exempt, new building permit applications are not being approved for the construction of additional hotels, motels, RV parks, campgrounds and condos.