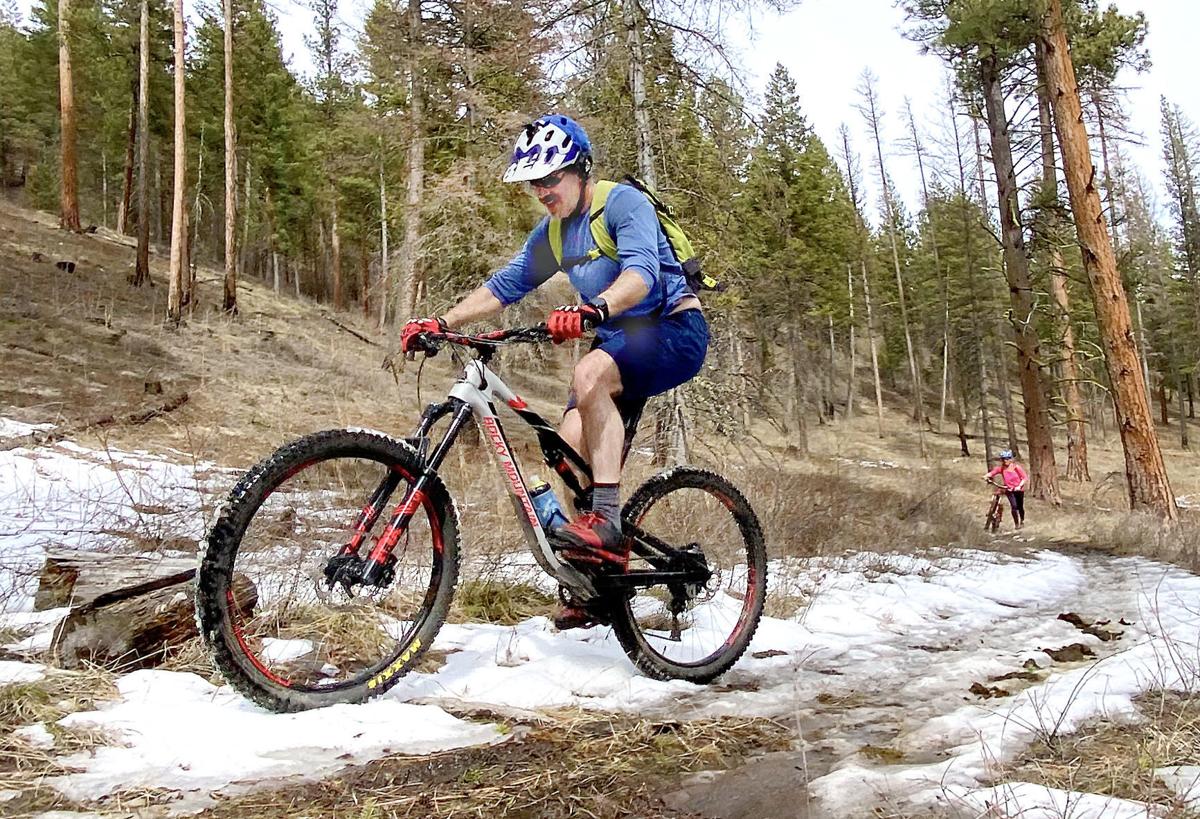 A pair of mountain bikers navigate a patch of snow in March at the Bitterroot National Forest’s Bass Creek Recreation Area. With campground reservations going fast and bookings for fishing float trips outstripping the supply of available guides, Bitterroot Valley outdoor recreation enthusiasts may be seeing more people on the trails and on the river this summer.

Last year was the busiest summer that John Cawley has ever seen in his 20 years as owner of Hamilton’s Anglers Roost RV Park and Riverside Campground in Ravalli County, Mont., according to the Ravalli Republic.

He’s expecting more of the same this year.

“It’s going to be a madhouse,” Cawley said. “I’m expecting the float traffic to be extreme. Outfitters are booked solid. They’re having trouble finding guides so they can take more reservations. We’re taking reservations like crazy here for the RV park.

“Last year was far and away the busiest year ever,” he added. “From what we’re seeing from reservations, I think it’s going to be just as busy this summer. It’s a little bit of everything. People looking for outdoor recreation, family reunions, weddings, or people sniffing around for a place to move.”

The days of finding a west side trailhead empty or being able to figure on getting a campsite at a popular campground Friday evening may have come to an end in the Bitterroot Valley as more people are discovering the great outdoors.

Lost Trail Ski Area is about ready to wrap up a record-setting season.

“It’s been a busy year,” said RJ Higgins, the ski area’s marketing director. “Once we got into the Christmas run, it took a turn and stayed very busy through the rest of the season. We set two records for single-day attendance this year.”

With one weekend left, Higgins said the ski area has seen about 58,000 visitors. It could end up hitting 60,000 by the time the lifts are shut down for the last time this season.

“I feel like there’s been an influx of people from the Bitterroot Valley and Salmon,” Higgins said. “People aren’t traveling as far and staying more local. At the same time, I think we have been picking up some stragglers from the Bozeman area ski hills that have a big reservation system in place.”

The Bitterroot National Forest is also gearing for what looks to be another busy summer.

All of the forest’s rental lookout towers and cabins have already been booked through the end of August. Most of the campsites that can be reserved are filled through the weekends and slots for weekdays are almost gone.

“We saw a big increase of use at dispersed recreation sites,” Strayer said. “People were camping in areas where we hadn’t seen people camp before.”

While Bitterroot Forest officials don’t have any numbers to quantify the increase in the use, they do know there were a lot more people at trailheads by how fast the toilets were filling.

“On the west side, we would normally have to pump the toilets twice a year,” Strayer said. “Last year, it was three or four times. There was a lot more use. We’re expecting to see that same type of use this summer, if not more. We’re already getting quite a few phone calls from people asking where they can go camping.”

“The days of heading out on a Friday afternoon and finding a spot to camp might be gone,” she said. “People may have to start to plan ahead. Instead of getting those places with first-come, first-serve on a Friday, they may need to get there Thursday.”

Bitterroot Valley fishing outfitter Eddie Olwell said his bookings for float trips are way ahead of where they normally are this time of year.

“Right now, I’m having a hard time finding guides,” Olwell said. “They’ve already been booked with other outfitters. I think the river is going to be pretty busy this year.”

That’s quite a change from last spring when the pandemic virtually shut down fishing outfitters’ businesses for several months.