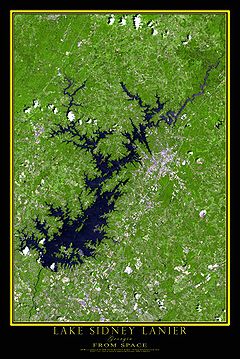 Higher lake levels and improved camping sites are expected to draw more campers this upcoming season at Georgia’s Lake Lanier, according to the Gainesville (Fla.) Times.

Early numbers show “we’ll have more people in the campgrounds,” he said. “This will be a busy year.”

Old Federal and Bald Ridge are scheduled to open March 26;. Duckett Mill, Bolding Mill and Sawnee campgrounds open April 11; and Van Pugh South, a former day-use park converted to a campground, could have a later start.

“We’ve got some things we need to get done there,” Johnson said. “Right now, we’re not taking reservations online because it may open a little later.”

For those eager to try out the new campground, check updates at www.recreation.gov, Johnson said.

Work at the south park involved building a gatehouse near the park entrance, which will feature full-time attendants.

In addition, crews paved, changed signs, trimmed trees back along the roads and completed other tasks to accommodate overnight campers.

Van Pugh Middle, which is next to the south park, has been reworked to feature 28 parking spaces.

Paving has been done at the boat ramp at Van Pugh North Park, which also features picnic areas, restrooms and beaches.

“There is demand for camping (in the area), and Shoal Creek used to be a very popular area,” Chief Park Ranger Chris Arthur said at the time of the work on the south park. The corps used to operate campgrounds at nearby Chestnut Ridge and Shoal Creek parks, which are now part of Lake Lanier Islands.

Nearly 500 campsites total will be available at the campgrounds, including 44 reopened ones at Bolding Mill.

Bolding Mill now has 97 sites, with improvements also made to a bathhouse and pier.

Before last season, federal budget cuts had shut down the campground for three years.

“Last year, you couldn’t see any of these (camp)sites,” Johnson said of the newly opened area, while walking through the park Monday afternoon.

“All this was grown up. They did a lot of trimming to the trees in here.”

Most of the campsites face the lake and all have a picnic table, fire ring, grill and lantern pole. All the campgrounds have beach areas, boat ramps and restrooms, and most also have showers, playgrounds and entry stations.

Schedules vary for the day-use parks, although many are open year-round. The beaches will, for the most part, open in April.