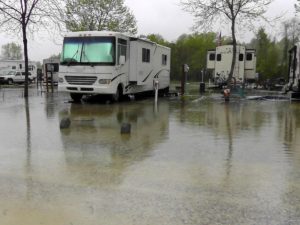 Heavy rainfall and rising flood waters resulted in a campground evacuation, a greenway closure and multiple wrecks on Tuesday (April 24) in McDowell County, N.C., according to mcdowellnews.com.

At approximately 8:05 a.m. Sunday morning, McDowell County was placed under a flash flood watch that was to be in effect until Tuesday morning. However, as heavy rain and poor road conditions continued through Monday night into Tuesday, a flash flood warning was put into place until 7:30 p.m. that evening.

At 10:23 a.m. Tuesday, doppler radar and automated rain gauges indicated that heavy rain was falling over the area. Three to four inches of rain had fallen over a 24 hour period, with up to an additional inch of rain expected.

In the wake of Tuesday’s frequent rain and rising flood waters, Emergency Management initiated a voluntary evacuation for the Riverbreeze Campground, off U.S. 221 North, with shelter at a higher elevation offered at the McDowell County Senior Center on Spaulding Road.

“I’m still deciding whether to leave or not,” said camper Macie Wymer, seen walking her dog in the rain and scoping out the campground. “The weather’s been nasty. The water came up right on the edge of the woods this morning and in two-and-a-half hours, it’s flooded the road.”

Like Wymer, other residents and campers on site weighed the option to leave based on their surroundings. Keith Carter, one such camper, said he had not planned on leaving the site at that moment and would wait until situation worsened.

“I’m hoping it’ll stop, but I’m looking at this,” said Carter, pointing to elevated waters by the adjacent RVs, “rather than that (the river).”