By: Woodall's Campground Management|Published on: May 31, 2018|Categories: Industry News| 0 comments 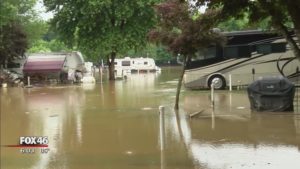 More than 4,000 people were still without power on Wednesday (May 30) evening following heavy rain and thunderstorms that rocked North Carolina on Tuesday, according to FOX 46.

Wednesday afternoon Gov. Roy Cooper and state officials gave an update on the state’s response to the severe weather damage.

People in McDowell County were watching closely after waking up to severe flooding. Residents had been told to evacuate as a precaution, but that evacuation was canceled.

When FOX 46 arrived at River Breeze campgrounds in McDowell County Wednesday morning, the water had gone down some, and a few people were back here going through their RVs, but towards the afternoon, police put up new tape and wouldn’t let anyone return back their campers.

“This is scary because this is nearly biblical in proportion,” Garry Winebarger, assistant superintendent of the Lenoir Street Department, said.

The campgrounds were barely recognizable under all the muddy waters.

“It’s scary, usually you see green grass and pretty lawns but this. You’d never believe that that was there, you’d believe you were standing in a lake,” resident Vettie Crocker told FOX 46.

With heavy rainfall and high waters threatening safety for those who call the campgrounds home looking for high grounds was a no brainer.

“We were pretty sure we were going under water at that time. The lower part of the campground, I live at the higher part and the lower part was already underwater when we came back,” said Mike Thomas, who lives at the campground.