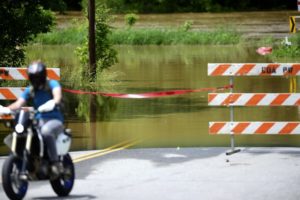 A motorcycle rider drives away after checking out where the French Broad River flooded into Lyman Street in the River Arts District in Asheville, N.C., on Wednesday, May 30. AP Photo

Editor’s Note: This story was updated on Friday (June 1) afternoon to reflect that Mountain Stream RV Park is back open for business after being without water, power and a phone for three days.

At least two North Carolina campgrounds have suffered damage due to tropical depression Alberto, the first named storm of the 2018 hurricane season.

According to Witting, a home on the property was flooded with around three feet of water in it at some point, and the campground suffered “severe” damage.

Mountain Stream RV Park in Marion was evacuated and Witting said they are back and open for business.

“They were without water, power and a phone for three days, but crews are working on it now,” she explained. “I am going to visit campgrounds in that area next week and hoping to get to spend some time with them.”

She noted that other campground members in the western mountain region seemed to be doing alright at this point.

Since its Memorial Day (May 28) landfall in the Florida Panhandle, Alberto’s heavy rains have been widespread, with flooding reported from Alabama through Tennessee, Kentucky, the Carolinas, West Virginia and Illinois, according to the Associated Press.

In the North Carolina mountain town of Boone, a mudslide was blamed for a gas leak and explosion that destroyed a home Wednesday afternoon, killing two people.

Four North Carolina dams being closely watched by a state team of special engineers were holding up, Gov. Roy Cooper said at midweek. But Cooper went ahead and declared a state of emergency for his hard-hit mountain counties, saying the forecast for the rest of the week calls for isolated heavy rain storms that could instantly cause flooding in areas that have had 20 inches (50 centimeters) of rain in the past 15 days.

Earlier this week, Bobby Cornwell, president and CEO of the Florida Association of RV Parks and Campgrounds (Florida ARVC), told WCM that so far no reports of significant damage at Florida RV parks or campgrounds had been made in the wake of Alberto.

“I don’t think the storm came to fruition like forecasters thought it would,” Cornwell told WCM.

While not suffering physical damage, he went on to say that RV park and campground owners probably lost out on Memorial Day traffic due to the storm.

“I am positive that some lost out on business though,” Cornwell explained. “Some campers were probably scared to come down or cancelled their plans. So there is definitely going to be an economic impact for some owners.”