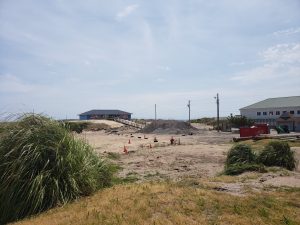 The Avon by the Sea RV Park is expected to open this summer.

The new oceanfront RV Park next to the Avon Pier will be opening within the next several months, hopefully by the Fourth of July, per property owner and pier operator, Joe Thompson, according to the Island Free Press.

The Avon by the Sea RV Park in the Outer Banks of North Carolina will feature 26 full hook-up sites, an electronic gated entrance, an on-site bathhouse, and dense vegetation, and will be situated on the northern side of the Avon Pier, per the site plans.

The project has been steadily progressing over the past few months, with construction crews working on the site hook-ups and parking areas. There are still a few items left to do before the park can officially open, including landscaping and constructing the bathhouse, which is expected to be completed in the next few weeks. “We are not accepting reservations yet, but we will once we have an opening date in mind,” said Thompson.

The park will encompass at least two acres of the 4.85-acre property, and Thompson stated that they will be adding ample vegetation to provide a natural buffer between the individual sites, as well as between the park and the rest of the oceanfront area. The oceanfront site in central Avon is also home to Pangea Tavern, the Koru Beach Klub, and the seasonal weekly farmer’s market, in addition to the Avon Pier.

While the RV Park will take up the northern side of the Avon Pier-adjacent property, and approximately two-thirds of the current parking spaces along the oceanfront. Parking for regular Avon Pier visitors will not be significantly impacted.

“We’ll lose about half of the parking for the pier that is oceanfront parking, but we’ll still have parking for the pier along the oceanfront, and of course, we have a plethora of parking sites near Pangea and the Beach Klub,” said Thompson in an earlier interview. “Unlike most of the piers on the Outer Banks, our property doesn’t lack in parking.”

The RV Park will operate within the guidelines of the recently revised rules for travel trailer parks in Dare County, which were adopted in October 2020. Each of the 26 sites will have 15’ feet of separation, and while travel trailers will be technically allowed to remain on a year-round basis, they must be fully licensed and ready for highway use, and free of excessive additions such as decks or porches. The site of the RV Park itself must also be at least two acres in size, per the new rules.