N.C. RV Park Is Evacuated Due to Flash Flooding 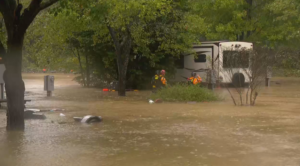 Rescuers work to evacuate residents from a N.C. RV park.

Lakewood RV Resort in Henderson County, N.C., was evacuated Thursday (Oct. 11) morning due to flash floods that swept through the area, according to WLOS.

The owners of the park said a nearby culvert had become blocked.

The flood waters were strong enough to partially submerge a vehicle. Everyone was able to safely make it to higher ground with the help of the Henderson County Rescue Squad.

The teams were called in to help evacuate folks from the low-lying portion of the campground.

WLOS spoke with one woman who lives and works at the campground, who said she was ready to ride out the storm from her RV.

“They had told me I had to get out. I was going to stay right there, because I am fine, I mean the water still wasn’t up to my door. I’ve been in hurricanes in Florida, this is nothing,” said Joyce Montgomery.