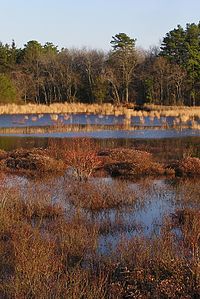 “The park was hit hard by Sandy, with numerous downed or damaged trees – some of which you can see from Pinewald-Keswick Road,” said Bob Considine, spokesman for the state Department of Environmental Protection (DEP). “It’s safe to say there were several hundred downed or compromised trees.”

The DEP assessed all the state parks after Sandy roared into New Jersey and prioritized which parks needed the most in terms of resources, he said.

“We have placed the most emphasis in improving the conditions at Liberty State Park and Island Beach State Park,” Considine said. “With Double Trouble, it has just been a matter of clearing where necessary and assessing for damage for the safety of our visitors. We would much rather take time to make sure the park is safe, than rush to reopen.”

There are still several areas of the park that remained closed until further notice to visitors – the Nature Trail and Double Trouble Road south of the White Bridge, Considine said.

“Some work still needs to be done, but we recognize the park means a lot to local residents and we’re happy that folks can enjoy a good portion of the park now,” he said.

The 8,495-acre park has miles of sugar sand trails that wind through pine and cedar forests and cranberry bogs. Double Trouble has a rich history of cranberry harvesting that began back in the early 1900s, when Edward Crabbe bought the tract.