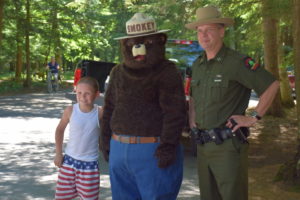 Braden Bacon, of Sodus, N.Y., poses with Smokey the Bear and Forest Ranger Captain John Streiff Wednesday (July 4) at Fish Creek Campground after Bacon and his grandparents took part in the bike parade.

The New York Department of Environmental Conservation (DEC) operates dozens of public campgrounds around the Adirondacks, but few are as well known — and none as large — as Fish Creek Campground, according to the Adirondack Daily Enterprise.

Fish Creek, just south of Saranac Inn on state Route 30, has 355 campsites. Rollins Pond Campground, also one of the largest DEC parks at 287 campsites, is accessed through Fish Creek, putting the total number of spots at 642. With a maximum number of six campers per site, the two campgrounds together could host 3,852 campers.

For reference, the village of Tupper Lake had 3,667 residents during the 2010 census.

Jesse Gonyea, who is in his third year as caretaker of Fish Creek, said that while the campground is full, his staff is doing a good job of holding things down.

“Every one of them [the campsites] is full, except for a few of what we call emergency sites,” Gonyea said Wednesday (July 4) as he prepared for the annual kids bike parade. “But every site that’s reservable is taken right now. The year has been good. With the late spring, the weather was tough. But this year is going good.”

Gonyea said despite having thousands of campers in his park, there haven’t been any big incidents. The campground has a narrow road, often with campsites on both sides. There are tents, trucks, trailers and RVs that can block drivers’ views and there are people walking, running and biking pretty much everywhere. Kids and dogs abound.

“Obviously, more people means more things can happen, but people look out for each other,” he said. “But I’d say safety and speeding are a big issue.”

Fish Creek is the first campground to open each year, with 15 sites open for camping as early as the middle of April. The park then opens in stages, as bathrooms and water lines are brought into service. Most of the other DEC campgrounds open in mid- to late-May.