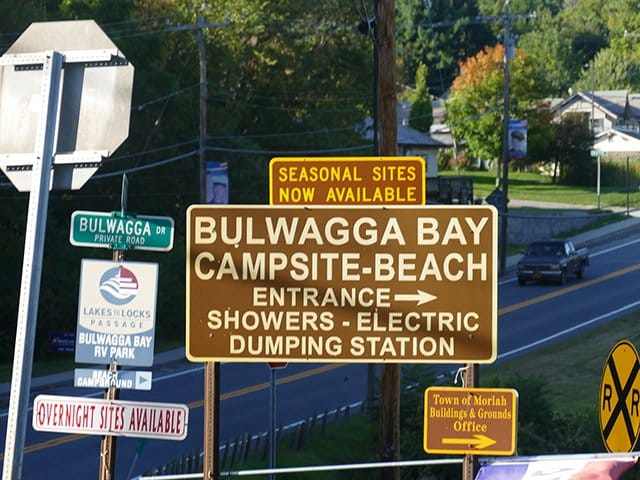 The entrance to the Bulwagga Bay campground in Port Henry, N.Y., is one of the areas that the town Waterfront Committee hopes to improve.

Moriah, N.Y., took a step toward waterfront revitalization last week, conceptually approving construction of a rental cabin at its Bulwagga Bay campground, according to The Sun.

Ideally, more cabins will follow, although the town is somewhat constrained by soil type, infrastructure and threats of flooding.

The decision came during a special meeting of the Moriah Town Board and its Waterfront Committee, which is seeking ways to optimize what is largely viewed as Port Henry’s greatest asset — seven miles of Lake Champlain shoreline.

The meeting drew a standing-room crowd of people, most of whom seemed to want more investment in the town beaches and campgrounds and better advertising of what Port Henry has to offer. The Waterfront Committee called for the meeting after a relationship with a New York City investor fell through.

“We really do have this incredible asset here — what we need now is direction,” said committee chairman Mark Davenport.

Moriah Supervisor Tom Scozzafava said the existing campgrounds are profitable for the town, but there’s potential for them to be more so. The town has budgeted for campground maintenance over the years, but not for capital improvements that might produce added revenue.

That will change over the coming year, with the cabin and a refurbishing of the Bulwagga Bay bathhouse, to include an Adirondack facade, new tile floor and showers. The committee is also seeking a grant that will pay for cosmetic improvements at Bulwagga Bay, a more attractive entrance and a much-needed site plan to organize the campsites.