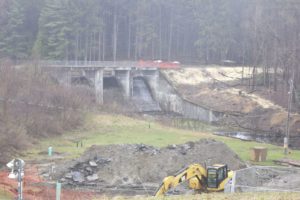 Clear Lake Dam is being constructed in late April. North Collins Town Supervisor John Tobia looked into the possibility of making the land into a campground as it also has a large plot of grass with it.

The town of North Collins, N.Y., is looking into the feasibility of acquiring state land that has the assets to become a campground destination in the area.

Clear Lake, which is right off of Genesee Road near Jennings Road, is owned by the state Department of Corrections and Community Supervision (DOCCS). It’s currently in a $4.8-million project on the dam, according to the Evening Observer.

North Collins Town Supervisor John Tobia asked Senator Patrick Gallivan for assistance in getting the land. Sen. Gallivan, who Tobia thanked for his help, gathered the group that included the state Parks Recreation & Historic Preservation and DOCCS to speak about the possible land transfer.

During the trek around the area, Tobia was amazed that the land had beautiful scenery and undeveloped land. In North Collins, many residents own campers, Tobia said, and there’s nowhere to go in the township.

“A lot of the people in our town go somewhere else in the summer,” Tobia said. “It’s an abandoned town. A lot of people go away camping. Why not stay right here? If you go up there, it looks like the Adirondacks. … You have no idea you’re in North Collins. The benefit is that you don’t have to go so far for those people who love to camp. It’s breathtaking.”

Tobia saw potential in the massive land and lake area. The first goal is attaining the land, which there was no promise of handing it over, but a possibility of that occurring.

“If we get that, a goal is to possibility make it into a seasonal campground,” Tobia said. “… It’s 540 acres of the most beautiful land you’ve ever seen in your life. You have 75 acres of a reservoir or 50 acres. It’s 25-feet deep in the middle. We can do kayaking, we can do sailing, we can do rowing, all non-motorized boats out there.”

Tobia is speaking with an engineering group out of Syracuse to see the cost expectations over the next 50 years and the associated expenses that may come with the land. After that, the town board will look into the grants that are out there with its grant writer.