Nat. Gas Price Averages at $2.86 since Start of April 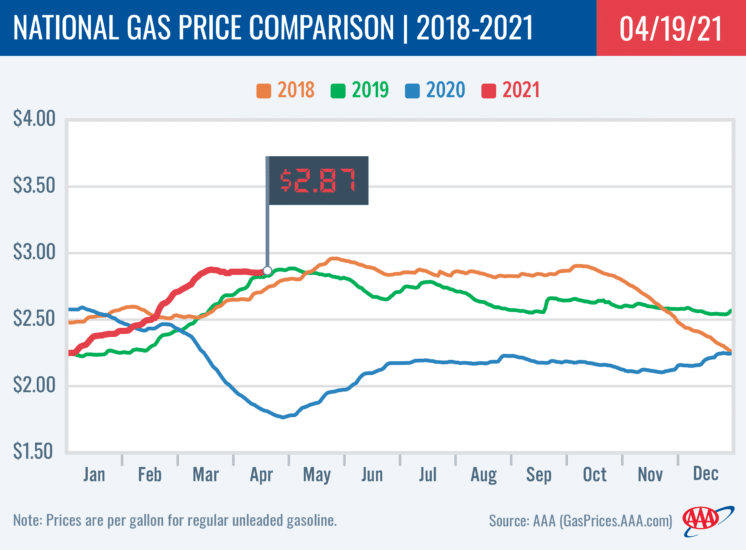 Despite gasoline demand mostly increasing this month, the national gas price average has seen little movement, fluctuating up or down by only a penny to $2.86 or $2.87, according to AAA. In fact, 10 of the past 12 days saw a steady hold at $2.86 despite demand reaching its highest measurement — 8.9 million b/d for the week ending April 9 — in more than a year.

“Refinery utilization is nearly back to pre-pandemic levels, and with gasoline stocks seeing builds in the last month amid lower crude oil prices, motorists have benefited from mostly flat gas prices,” said Jeanette McGee, AAA spokesperson. “However, crude started to see some upward movement this week, which could translate to small increases at the pump by the end of April.”

At 85%, refinery operations are at their fullest capacity since the week of March 23, 2020, according to Energy Information Administration (EIA) data. Should this positive utilization trend continue, it could help to offset increases in demand and help the national average stay under $3/gallon.

On the week, the majority of states saw little fluctuation at the pump: 27 state averages held steady while another 16 saw pump prices increase or decrease by only one or two cents.

Today’s national average is $2.87. Compared to a year ago, gas prices are very expensive as mid-April 2020 was prime quarantine time across the country. While the national gas price average is $1.05 more than last year at this time, it is on par with averages from April 2019.

At the close of Friday’s formal trading session, WTI decreased by 30 cents to settle at $63.13. Although prices ended the day down, due to the market consolidating pricing contracts, the price of crude gained over $3.80 per barrel last week. Continuing market optimism that crude demand may increase more than expected due to increasing vaccine rollouts helped to lift prices. Additionally, EIA’s weekly report revealed that total domestic crude inventory decreased by 5.9 million bbl to 492.4 million bbl, contributing to price increases. If crude prices continue to rise and remain high, pump prices will likely follow suit.