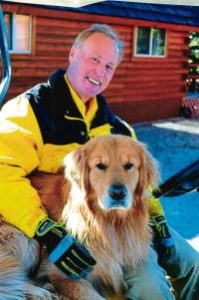 Greg Query, owner of Estes Park KOA, with Murphy, the family’s dog who is often present at the campgrounds.

The Estes Park Kampgrounds of America (KOA) is a base camp for visitors of Estes Park, Colo., whether they are tent camping, using an RV or staying in one of the park’s cabins.

The campground has been family owned by Greg and Peri Ann Query since May 2016 and operated as a true family business ever since. Both of the Query’s children work at the campgrounds, according to the Trail Gazette.

“People go camping to try to make a memory for their family,” Greg Query said. “We’re here to facilitate that.”

Query said he has been camping and backpacking all his life and knows exactly what campers want and need. He even met his wife on a backpacking trip in Michigan. He and his family are fans of national parks and have visited and camped at many of them in the past. However, Query said they had only been to Estes Park a couple times before purchasing the business.

Query had been president, CEO and majority stock holder of a small insurance company before deciding to leave that business and purchase a campground. He looked at many different available campgrounds, but had some specific requirements. Query said he wanted to live in a small town, to be able to see the stars and to be near a national park.

When he looked at the options Estes Park was the obvious choice.

Query said his first year went smoothly as he learned the business and since then they have been working to improve the campground. This year they renovated the tent area, terracing it to level out the tent sites. They have also added a new bathhouse with showers and an elevated tent site.