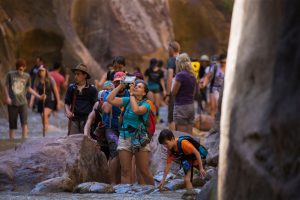 The rocky shorelines, shifting deserts and winding canyons of the country’s 59 national parks have been hallmarks of American vacations for generations.

But the number of park visitors has reached an unprecedented level, leaving many tourists frustrated and many environmentalists concerned about the toll of overcrowding.

According to the New York Times, in 2016, the National Park Service tracked a record 331 million visits, and after a busy summer, the system is likely to surpass that number this year. In August alone, some 40 million people came through park service gates.

Shuttle buses at Zion National Park, in southwest Utah, filled like sweaty subway cars. Selfie-takers clogged the slender path through the Narrows slot canyon, one of the park’s best-known attractions. And at the top of Angels Landing, an iconic trail of switchbacks on the east side of the park, some portable toilets were marked off with a sign: “Due to extreme use, these toilets have reached capacity.”

Zion is among the most visited parks in the system and is particularly prone to crowding because many of its most popular sites sit in a narrow six-mile canyon. In 2016, about 4.3 million people visited, up 60% from a decade ago.

So this year, park managers announced they were considering a first for any national park: requiring reservations for entry. A final decision is expected in 2018.