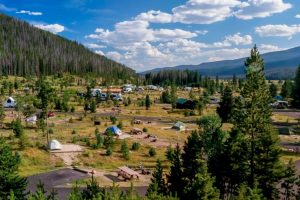 The Timber Creek Campground at Rocky Mountain National Park. Timber Creek is the only campground located on the west side of the park.

According to Colorado Public Radio, campgrounds are a smaller bucket, comprising just $87.3 million in critical and routine deferred maintenance.

“Contemporary campers expect a variety of services when they go to a campground,” said Derrick Crandall, counselor for the National Parks Hospitality Association (NPHA) and president of the American Recreation Coalition (ARC).

Crandall explained that companies can provide much needed upgrades to park campgrounds, while adding amenities like food stores, Wi-Fi and tent rentals. By his estimate, more than 80% of Americans live in urban areas, so while it’s great to get them outside for a taste of the lifestyle, Crandall said you “don’t really need to inconvenience them or scare them off.”

Inside Rocky Mountain National Park, Tim Griffard of St. Louis, Miss., seemed to be doing alright. He had mountain views, deer, elk, and moose — all for just $26 a night for the basic campsite.

“You can’t help but to be impressed,” Griffard quipped about the location.

There’s plenty of hiking, but the campsite isn’t perfect. There’s no Wi-Fi as Crandall suggested. There’s no showers and the toilet is a bit of a pain. Right next door is a large bathroom with running water, but it’s fenced off. A big red sign reads “Area Closed: Keep Out”.

“It’s not optimum,” Griffard laughed. “But it’s the last spot available and here I am.”

The department doesn’t have a formal proposal. Rocky Mountain National Park declined to comment, citing the lack of specifics, but Zinke has mentioned expansion of public-private partnerships for campground management multiple times, including a conference call with reporters and at a Recreational Vehicle Industry Association (RVIA) meeting.

Right now companies manage about 100 of the country’s 1,387 national park campgrounds, including Mesa Verde. They provide basic services like toilet cleaning and trash pick up. 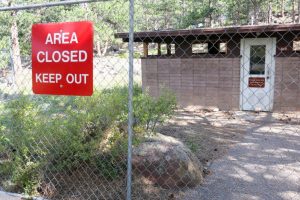 Rocky Mountain National Park has a $75 million maintenance backlog that includes, roads, buildings, trails and restroom facilities like this one. It’s part of an estimated $11 billion deficit the National Park Service faces.

“It’s not entirely clear that the kind of development that might occur with some privatization of the campgrounds would necessarily be a good thing,” said David Nimkin, senior regional director for NPCA’s Southwest region.

Sure, campgrounds might get a facelift, but Nimkin worried about the impact to prices. He also pointed out that if private companies hold the reins, that could result in layoffs for rangers.

In contrast to Derrick Crandall’s call for more modern amenities, Nimkin’s evaluation is that the National Park Service needs to find other ways to appeal to the next generation.

There may be a middle road. In the Rocky Mountains, the U.S. Forest Service has companies managing 70% of its bookable campgrounds. They collect fees, clean the toilets and mow the lawn. A contract determines the rates and payments the forest service receives, typically between 7% to 17% of gross revenues.

“So the forest service is able to then use the money that we would normally spend to do those types of things and run other recreation programs,” she said.

The Coalition To Protect America’s National Parks, a group of 1,300 current and former National Park Service employees, remains deeply skeptical of company-operated campgrounds. In a letter to Secretary Zinke, the group estimated that franchise fees from companies could amount to as little as $890,000.

Phil Francis, a member of the coalition and former superintendent of the Blue Ridge Parkway between North Carolina and Virginia, said he weighed whether to bring in concessionaires to operate campgrounds during his tenure to save money. 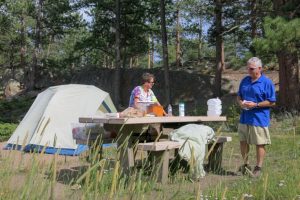 Tim Griffard and his son, Tim Griffard, paid $26 a night to camp at Moraine Campground inside Rocky Mountain National Park. Interior Secretary Ryan Zinke has mentioned privatizing campgrounds such as this. Opponents worry that could jack up nightly rates.

He said the proposed concessionaire was unwilling to make capital investments to buildings and facilities on the campgrounds, key needed improvements.

“When I looked at that, then also considered intangibles like having your own staff [on the campground] dedicated to park mission, it was pretty clear to me that it would be better to continue the way we had been doing business,” Francis said.

The National Parks Hospitality Association and American Recreation Coalition’s Derrick Crandall countered that NPS staff could be integrated into private campground management. He estimated that $150 million in annual franchise fees related to hotels and restaurants are paid to the park service every yea, 80% of those fees can be retained by the park collecting the money.

On the sidelines of the debate are Estes Park business owners like Greg Query. Campers come to his Kampgrounds of America (KOA) franchise because Rocky Mountain National Park’s campgrounds often sell out. Others come because they want the showers, Wi-Fi and coin laundry that KOA offers.

If the National Park Service makes upgrades, Query’s not worried. He said Zinke may even want to take a page out of KOA’s playbook. Every year about 40 million people camp for at least one night. The way Query decides what to improve at his campground is to ask people what they need.

“It’s not really about what the administration wants,” he said. “It should be focused on the guest.”