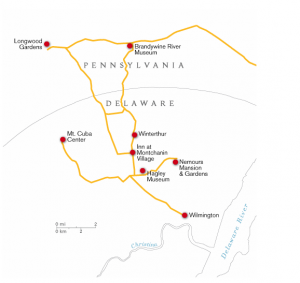 This map shows some of the points of interest in Delaware’s Brandywine Valley, portions of which could some day become part of the next U.S. national park.

More than 1,100 acres in Wilmington’s scenic Brandywine Valley could be preserved in perpetuity as part of an ambitious plan to incorporate Delaware’s most significant historic and cultural sites into a national park, the Smyrna-Clayton Sun Times reported.

Delaware’s congressional delegation announced Tuesday (Aug. 28) that the rolling hills just west of the U.S. 202 corridor were being eyed by the National Park Service as the recreational focal point of the park.

More than 300 people attended a public meeting on Tuesday, and they repeatedly applauded the national park plan.

The brainchild of Sen. Tom Carper, the park would include well-known historic landmarks in each of Delaware’s three counties, which collectively would tell the story of the state’s first European settlements and prominent role in Colonial America.

Unlike the expansive natural lands that define the American West, Delaware’s national park would, in essence, serve as a history trail that would link important historic and cultural sites together.

So when The Conservation Fund purchased the 1,100 acres on the Brandywine from the Woodland Trustees earlier this year, advocates jumped at the opportunity to include the sweeping property in park plans.

Blaine Phillips, the Mid-Atlantic director of The Conservation Fund, said the land offered a unique combination of historical importance and recreational opportunity.

“The Brandywine literally powered the paper mills and textile mills and powder mills that helped grow the country,” Phillips said. “The Woodlawn property … is the largest undeveloped property along that Brandywine.”

Initially conserved by Quaker philanthropist and conservationist William Bancroft in 1809, the property was Delaware’s answer to New York’s Central Park – an urban oasis that would exist in perpetuity as development reached north from Wilmington along what is today the Concord Pike corridor.

The land, much of which was initially purchased by William Penn from the Duke of York in 1682, straddles the 12-mile arc that extends from the New Castle Courthouse – another landmark proposed in the park plans – that defines Delaware’s northern boundary. But its history dates back even further, as is evidenced by the Leni Lenape artifacts that were plentiful in the Brandywine Valley.

But in addition to its historic appeal, the Woodlawn property also offers many of the recreational opportunities – hiking, mountain biking and horseback riding – that are commonplace in national parks across the country.