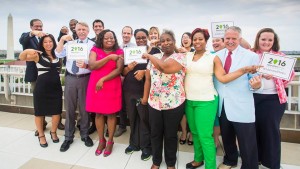 The National Park Service turned 98 years old Monday (Aug. 25) by sharing a photo of its employees, including Director Jon Jarvis, displaying the service’s Centennial logo as it begins the countdown to its 100th anniversary in 2016.

As part of its birthday celebration, Monday was an entrance fee-free day at all national parks, which also hosted a number of events across the country.

“Today, we reflect on almost a century of preserving some of the most spectacular and meaningful places for the benefit of all Americans,” stated Jarvis in a release. “As the countdown begins to the National Park Service’s Centennial in 2016, we want to introduce a new generation of park visitors and advocates to their national parks. These national treasures collectively tell the story of our country – who we are and what we value as a society.”

“We are thrilled to commemorate another year of the important work that our partners at the National Park Service do every single day, and we invite everyone to join in on the fun and celebrate with the entire national park community,” said Neil Mulholland, president and CEO of the National Park Foundation. “We encourage you to bring your friends and bring your family, and help us inspire even more people to connect with and enjoy their national parks.”