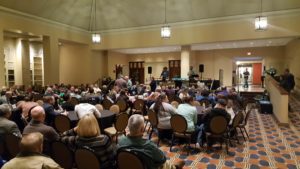 Cyndy Zbierski, executive director of the Northeast Campground Association (NCA), said that the 54th Northeast Conference on Camping and Trade Show, held from March 16-18 at the Double Tree by Hilton Boston North Shore in Danvers, Mass., had “amazing energy”.

“It was a great experience and the venue served us well,” she told Woodall’s Campground Management. “The cracker barrels all had a positive vibe this year and everyone is reporting that they had a great 2017 and expect the good times to continue in 2018.”

While the final numbers are not in yet, the conference attracted campground owners and operators from numerous states, and Zbierski said that a lot of walk-ins participated on both Saturday and Sunday for the trade show.

The theme of this year’s conference was “Waves of change, oceans of opportunity”.

The first day of the conference, Friday, March 16, included a full day of National Fire Protection Association (NFPA) 1194 sessions. The conference was one of eight locations that are taking part in the National Association of RV Parks and Campground’s (ARVC) NFPA Roadshow, the program allows owners and operators to become NFPA certified and potentially realize a 15% discount on their property and liability insurance through the Cedar City, Utah-based Leavitt Group.

“This is something that is occurring in every city,” said Gavin.

Lyndsey Birky, owner of Smuggler’s Den in Southwest Harbor, Maine, was a public-school teacher for 30 years and said that the topic was very relevant for campground owners and operators. 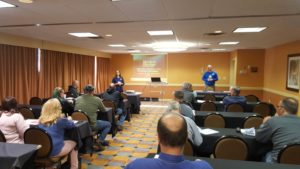 “We need to get out of the mindset that it can’t happen at our campgrounds,” she said.

Also on Friday, conference attendees had the chance to go on a behind-the-scenes tour of Co-Co Key, a waterpark that is attached to the Double Tree by Hilton. Led by the water park’s director Lisa Knowles, there was a chance to ask questions and get inside details on how the facility operates.

With four large slides, along with a splash zone and lazy river, among other features, Knowles said that the waterpark attracts large crowds during the warmer summer months and that maintaining the facility was a “full-time job”.

“It really is a collective effort by everyone that works here,” she said.

The facility hires around 22 lifeguards to make sure everyone at the park stays safe. Knowles said that the facility operates under a zone validation method.

“We want to make sure that we have eyes on every foot of this facility while it is open,” she said.

Other classes on Friday included a panel on understanding Millenials, a special women’s cracker barrel and a panel on RV repair options.

On Saturday, the morning was filled with a variety of sessions that covered numerous topics. Irene Jones, development manager of Poughkeepsie, N.Y.-based Marshall & Sterling Insurance’s campground and hospitality program, spoke with campgrounds about the importance of planning for “worst-case scenarios” during her session titled “Golf Carts, Inflatables, Fires & Business Interruption: A closer look at best practices and claims”.

“You want good procedures in place to protect your business,” she told attendees.

Jones told park operators that it is important to be cognizant of coverage options and how a piece of recreational equipment, or even golf carts, may affect your business if someone were to get hurt.

During a session entitled “Mobile Matters: Technology & Guests”, Travis Gere, co-founder of Vt.-based CampersAPP, told attendees that making sure they have a website that can be easily operated on any device is key.

“We are seeing a big shift away from the traditional desktop computer,” he said. “The majority of people now are using mobile devices and it is important that your business’ site can adapt.”

On Saturday afternoon almost 70 vendors took part in the conference’s trade show, with a steady flow of people keeping vendors busy throughout the rest of the day.

The NCA Annual Auction was held after dinner on Saturday evening, with more than $18,000 raised for the association’s scholarship fund.

On Sunday, the last day of the conference, the NCA continued to host its trade show and also held a board meeting.

The 55th Northeast Conference on Camping and Trade Show will once again be held at the DoubleTree by Hilton in Danvers, Mass., from March 15-17, 2019.