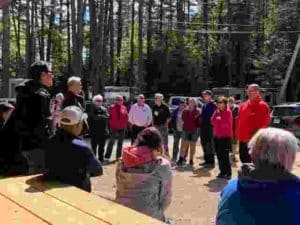 The 2019 Northeast Campground Association’s (NCA) Great Escape to Maine was enjoyed by 105 campground operators from 41 campgrounds, including several NCA business members from Sept. 17-18, according to Cyndy Zbierski, NCA’s executive director.

The majority of the attendees camped at the host site, Cove Communities’ Point Sebago Resort in Casco, Maine, she explained.

“Over two days the group visited campgrounds and enjoyed catching up with peers and making new connections,” she said.

Highlights of day one included NCA’s Fall Meeting, Mama Marucci’s meatballs and gravy at Colonial Mast Campground, along with a walking tour, time spent at Four Seasons Family Camping Area and a narrated cruise on the Songo River Queen II.

After another meal at Point Sebago Resort, day two began with a tour of Sebago’s Crooked River Campground, a walk on the beach at Kokatosi Campground followed by lunch and a tour at Naples Kampgrounds of America (KOA).

After lunch attendees returned to Point Sebago Resort and Don Toms guided dozens of golf carts on a tour of the many facets of Cove Communities’ Point Sebago Resort. That evening attendees enjoyed Maine lobster and a little singing and dancing before heading back to their campgrounds the next morning.

In 2020, the NCA Great Escape will move to its next stop in New Hampshire. Look for details next spring at CampNCA.org.

NCA is an association of associations, including the state associations of Maine, New Hampshire, Vermont, Massachusetts, Connecticut, New York, New Jersey, Pennsylvania and Maryland, in addition to associate members from Delaware and Rhode Island.