NCA Members Learn How to Cope with the Unexpected 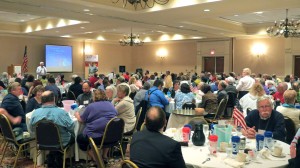 Campgrounds in the Northeast experienced in 2011 some of the worst weather in their history, from tornadoes in the early summer to severe rainstorms and flooding and even a tropical storm in the fall. Dozens of parks were damaged, there was loss of life and at least a half-dozen parks will not reopen under their present ownership.

So, it did not come as a surprise that one of the best-attended seminars at the 2012 Northeast Conference on Camping held last week was the one titled “Real Life Stories: Rebuilding After a Visit from Mother Nature.”

The 48th Annual conference was held March 22-24 at the Sturbridge Host Hotel & Conference Center in Sturbridge, Mass. The event drew representatives from 116 campgrounds, up from the 2011 conference, reports Cyndy Zbierski, executive assistant for the Northeast Campground Association (NCA).

Panelists discussed the permitting process when rebuilding, knowing what is in your insurance policy, surprises that occurred during rebuilding, the rallying of seasonal campers who helped in rebuilding and the problems encountered in securing adequate financing to rebuild.

“It was one of those sessions you wished everyone could attend,” Zbierski said.

A compelling aspect of the 2011 tragedies was the outpouring of concern showed by their fellow campground owners, Zbierski noted.

For example, “The Massachusetts Association of Campground Owners (MACO) with Marcia Galvin as executive director began immediately (after the June tornadoes) raising funds for the campgrounds within their association that were damaged by the storms. Their plea was put out through the NCA office and went nationwide. Ten Northeast states and campgrounds across the country gave to MACO and to the campgrounds in need,” she said. 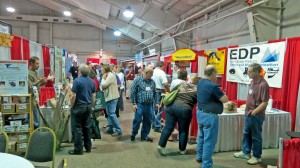 There was plenty of other showings of goodwill during the NCA conference.

Keynote luncheon speakers on March 23 were the father-son duo of Paul and David Karofsky, consultants from Massachusetts, who spoke on business succession planning.

The trade show attracted 81 vendors, 22 of whom were first-time exhibitors at the NCA conference.

NCA members are evaluating comments from this year’s conference which will be considered as the 2013 event is planned starting this summer. The 2013 conference will again be held in Sturbridge, March 21-23.