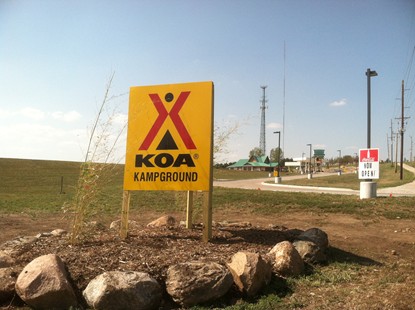 Entrance to the new KOA in Waterloo, Iowa.

A tropical paradise awaits campers just minutes from home in northeast Iowa — even in the winter.

The year-round KOA Waterloo/Lost Island opened more than a week ago across from Lost Island Waterpark in Waterloo and continues a theme of bamboo groves, thatched roofs and vibrant colors, the Waterloo Courier reported.

Manager Karl Kozak is hoping reservations pick up for the approaching holiday weekend. Already the facility has hosted local residents, as well as travelers from around the globe.

“Mostly one- or two-nighters,” said Ben Schulz, an assistant manager with Michael Powell. “We’ve had some people from Canada, bikers from Australia. We had one biker from Scotland.

“We had a birthday party here the other night,” he added. “Eight boys and two adults stayed the night and just had some fun.”

Other amenities feature a 15-acre lake with about an acre-sized beach, wireless Internet, cable TV, picnic tables, laundry facilities, a playground, picnic pavilions, disc golf, a dog park, a recreation trail around the lake and paddle boat and kayak rentals. Beachgoers can wade through four to five feet of water to access an island and pavilion in the middle of the lake.

Crews are working on finishing touches, including establishing grass and completing a second shower house. Kozak is living in a cabin but will eventually move into a house on site.

Future plans also involve weekend family activities, such as karaoke or live music. A pool table and board games are in a recreation room at the back of the full-service Bamboo Ridge convenience store, which opened last September and offers E85 and diesel.

The campground adds yet another piece to the growing entertainment hub south of Crossroads Center. The water park has closed for the season, but nearby attractions include the Isle Hotel Casino Waterloo, Adventure Golf and Go-Karts as well as South Hills Golf Course. The front six cabins and about nine campsites will be available year-round.

“Send your grandparents over to the golf course or the casino, and the parents and kids over to the waterpark,” Schulz said. “This will be home base.”