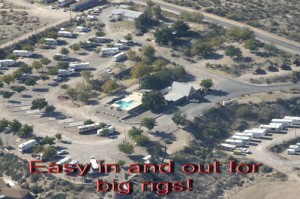 Aerial view of the KOA campground in Las Cruces, N.M.

Tony Fassi’s improvements at the 100-site KOA campground near Las Cruces, N.M., he and his wife have owned for six years are plenty green — but they’re also helping save plenty of “green” too.

Or at least, they were.

A year ago, he installed an $800 system of black tubing, which circulates pool water and heats it to 98 degrees Fahrenheit (KOA keeps it at 85). A professional solar hot water heating system installed by Sun-Tech services cost about $9,000.

“Our average was $500 a month. It’s gone down to $50, I swear to God,” enthuses Fassi, 59, a retired cardiovascular anesthesiologist. “It’s craziness!”

And then, there’s the evaporative lagoon, which cost $100,000 – a third or fourth the cost of a wastewater treatment facility. The Las Cruces KOA, 814 Weinrich Road, just off U.S. 70, is the fourth KOA in New Mexico to build a lagoon, and one of many signing on to solar use, Fassi said.

“It’s a living organism. It’s great,” Fassi said, pointing out the slag construction keeping the 630,000-gallon pool from washing away, the 20-year membrane liner and – best yet – the fact that there’s no odor evidencing the fact that the lagoon used to be septic tank effluent. Neighbors ask if they can fish in it, or swim, he says (a gate and plenty of signage prevent that).

Other RV parks and trailer parks haven’t been as quick to comply with state efforts to get them to clean up their wastewater, Fassi said, and “there’s several mobile home parks around here that are in trouble.”

“The current tax benefits at the state and federal level for installing alternative energy systems is having the desired effect,” Bixby said. “There are three or four solar installers right now (in Las Cruces) and when we installed ours, there were none. That was only two years ago.”

Now, the state plans to use the Fassis’ park as a model for others, he said.