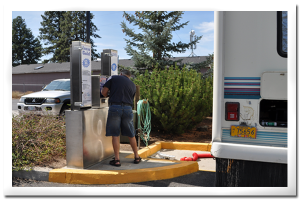 A Sani-Star RV dumping station in use.

Within the village of Eagle Nest, N. M., RV dumping areas are few and far between.

“I thought I’d entertain the idea and see what council thought of it,” Lowery said. “It could be a revenue source, and it could be put just about anywhere. It’s operated by solar power.”

The dump stations would go straight into sewer systems, so they must be strategically placed.

“The travelers have been asking about it, and they want to dump their sewer storage tanks,” Lowery said, adding there are no dumping stations within Cimarron Canyon State Park. “Most of the RV parks don’t have a place to do that.”

Lowery said he came across a sales and marketing representative with Sani-Star, the maker of the RV dump stations, and became interested by the product.

“He said he could work with us whatever way we want to use facilities,” Lowery said. “They have a one-time charge $1,250 to set it up and offer a system, plus they freight the system.”

The implementation of these systems is in its infancy, but Lowery said he intends to speak to many people about the possibility of bringing them to Eagle Nest, as the village would be able to reap some of the benefits.

“We’re probably going to talk to the (New Mexico State) Parks people,” Lowery said. “If this thing could take place, and the access for travelers and campers would be a convenience for them, it could supplement Eagle Nest itself.”

Lowery said the service charge is about $5 to $10, and that money could go straight into the general fund. Eagle Nest RV parks see hundreds of visitors during the Fourth of July weekend alone and a stream of visitors throughout the year.

Lowery said he has seen the stations in Tucumcari and Albuquerque.

“I’ve been as an RV user myself, and I’ve seen some of these stations but not with the credit card,” Lowery said.

Lowery said he intends to look into more costs and fees and more financial inquiries, but he said there are still a lot of questions that need to be asked.

“Everyone seemed to like the idea, but we’ve got plenty of time before now and next spring,” Lowery said.