By: Woodall's Campground Management|Published on: May 11, 2012|Categories: Industry News| 0 comments 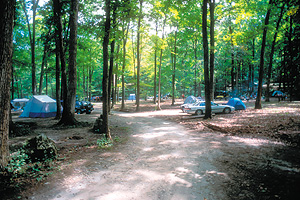 Some of the wooded tent sites at the newly named The Great Divide Campground near Newton, N.J.

Carmine and Lisa Torella have purchased the Green Valley Beach Family Campground near Newton in northwest New Jersey and renamed it The Great Divide Campground. They took possession on May 3 and hope to open the 265-site park on May 18. It is their first campground they have owned.

The Torellas have enjoyed camping as a family for years (he’s 38 and she’s 37) and had a strong desire to make their hobby their career. They had one major problem. They needed to remain near their electrical business where Carmine would be able to maintain his management responsibilities. 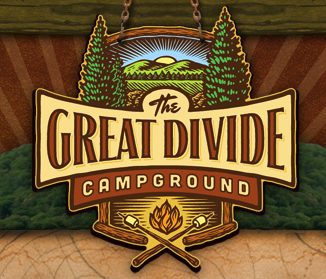 They took the unusual step of hiring Recreational Business Partners (RBP) of Billings, Mont., to conduct a search to meet their very specific guidelines. RBP used its proven system to search New Jersey to find a park, contacting parks that may have been on the market but many were not, explained RBP partner Dan Singer.

One of the contacts made was Jan Christie of The Green Valley Beach Family Campground. Christie had not listed her campground but she was ready to retire after decades of work. The Christies built the park when they were newly married and opened it in 1964.

After some negotiations, the deal with the Torellas was put together and Christie didn’t have to pay a sales commission.

As Carmine explained in an interview with Woodall’s Campground Management: “Give credit to Dan Singer and his associates. I find these two guys in Montana and they found me a campground I had never heard of and it was 35 miles from my house. If that doesn’t say a lot about them and their business, I don’t know what does.”

Torella relates another odd quirk to the story. He and his wife had arranged to have friend Jan Hudson manage the campground for them. That the former owner and new manager are both named Jan is just one of several coincidences. Hudson’s husband’s first name is Russ, as was Christie’s.

This is a classic circle of life for this campground. An older owner is able to retire being paid for a lifetime of hard work and a new young couple is taking over to rejuvenate and give new life to the business, Singer noted.

As the season begins, the Torellas are busy making improvements and putting their personal touches on the park. They’ve updated the restroom facility, spruced up the campground and ordered six new cabins.

“We’re totally excited, this is a dream come true. We have talked about it for years. This is fate that we found it,” Torella continued.

The campground’s new website, www.campthegreatdivide.com, is live but under construction.

If you were wondering about the name, The Great Divide comes from a favorite song of Carmine’s, “The Wedge,” by the band Phish that has a verse which says: Take the Highway through the Great Divide.

“It’s how we feel about camping – the divide between work and play,” he said.