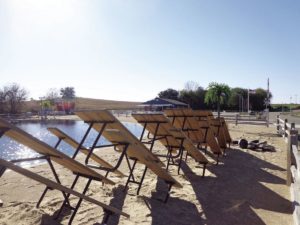 The picnic tables at Marshall, Wisc.’s Whistle Stop Campground are stacked for the winter after the first year of operations, which exceeded expectations.

About a year ago, Marshall, Wisc.’s Whistle Stop Campground was a pile of dirt, according to The Courier.

Under the direction of Bud Styer & Associates LLC, the campground opened in May and just completed its first season. The campground took in $237,590.97 in revenue this season which exceeded the village officials’ projected revenue of $149,000.

“There is a slight profit being made in year one, but we won’t have a finalized number until the audit is conducted in January,” he said.

In just a year, the campground featured a train transporting campers to the adjacent Little Amerricka Amusement Park, a swimming pond with a beach and water toys, horseshoes, cabins, Wi-Fi hotspot, a dunk tank, basketball and volleyball courts, a playground and RV camping.

The campground also had a wrist band program to include bikes and pedal carts, spaceball and a jumping pillow.

“We just shot it out of the park,” Ruechel said. “From a revenue standpoint, we saw a 160% increase over the budgeted figures.”

Seven high school students were hired for the summer.

The campground was at or near capacity right after the Fourth of July until the end of the year on weekends, Ruechel said. Only a couple of weekends were not full, he said.