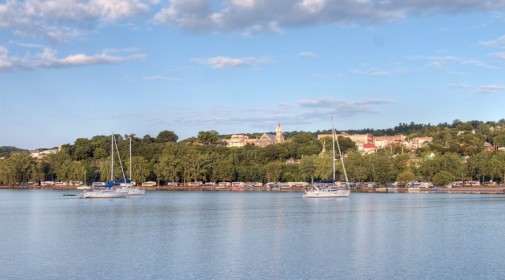 A view of the Village Campground in Port Henry, located near the southern end of Lake Champlain located in upstate New York.

The state of New York will pick up the local tab for most repair from last summer’s tropical storms.

That’s good news for the village of Port Henry which had to increase taxes 4.4 percent in its tentative 2012-13 budget, largely to meet its share of flood repairs to the Village Campground on Lake Champlain, the Plattsburgh Press-Republican reported.

It’s probably too late to change the budget, Village Mayor Ernest Guerin said Wednesday afternoon, but the money can be used to lower costs in the next spending plan.

The public hearing on the budget is at 7 p.m. Monday, and Guerin said they may not get the state reimbursement for months — or even until next year.

“We cut everything we could out of the budget,” he said. “The biggest thing that impacted us was loss of revenue from the campground.”

The village estimated that figure at about $40,000 this season, with another $20,000 owed this year on the campground repair loan.

Only about 45 of 70 seasonal campers have returned, but Guerin said there will be an open house at the campground to show it off. Repairs are under way now, and a normal Memorial Day weekend opening is expected.

The village would have owed about $118,750 for the campground reconstruction, a share the state will now assume. Total project cost is about $950,000.