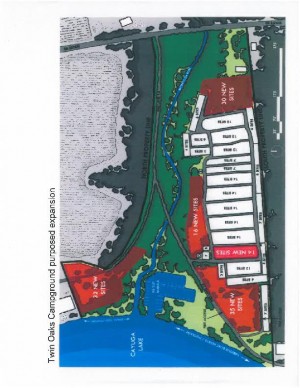 Map shows the layout of the Twin Oaks Campground with new expansion sites in red. Map courtesy of The Citizen.

With another possible expansion of the Twin Oaks Campground and Marina, residents of Fire Lane 14 near Springport, N.Y., fear their quiet, idyllic way of life is under siege.

The neighbors said they first became weary of the campground — located on the southern fork of Fire Lane 14 — in 2007. Although the neighbors bought property on the street knowing Twin Oaks was just a creek and trees away, they said a thick fence of foliage, bushes and rocks muffled noise and blocked campers from view, Auburn’s The Citizen reported.

“There was such a natural barrier, we didn’t even really know it existed,” Diana Rodriguez, of 530 Fire Lane 14, said.

For two years, Diana and Luis Rodriguez said they lived in peaceful cohabitation with the campground, enjoying their newly built lakeside home. Connie and Eric Scott, of 534 Fire Lane 14, said they reveled in the peace they purchased with their summer home, splitting time between Springport and Memphis, Tenn.

Both the Rodriguezes and Scotts said they initially had no problem having the campground for a neighbor. But when the campground’s owners began to chop down trees and uproot foliage, every family on the street took notice.

In the fall, the neighbors learned brothers Karl Rindfleisch Jr. and Andy Rindfleisch, co-owners of the campground, had sent a letter to Springport’s planning board requesting a special use permit to expand their campground right up to one of the neighbor’s white fences.

The proposed expansion — viewed by the Fire Lane 14 residents as more of an invasion — alarmed the families.

So, in conjunction with Linda Fort, of 543 Fire Lane 14, and Brad and Mary Rindfleisch, of 546 Fire Lane 14, the Rodriguezes and the Scotts began to delve into the history of the campground they’d previously given little thought to.

And what they unearthed about the history of the campground owned by Karl Rindfleisch Jr., Springport’s town justice, and Andy Rindfleisch, a town board member, caused them alarm.

The Rindfleisch brothers first applied to turn a parcel of lake-bordering land into a campground on Dec. 25, 1989.

In the Twin Oaks proposal, Karl Rindfleisch Jr. told the state he and his brother planned to install 28 campsites onto an 18-acre property, records show.

According to the proposal, the campsites would be restricted to self-contained trailers rented on a seasonal basis. Sewage disposal would be treated in septic tanks, and water would be provided to campers at each site via an on-site well.

In a narrative report for the proposed site, Rindfleisch wrote that although the original proposal included anticipated future sites, the plans were merely sketches.

“The actual layout and number of the future sites are not final and (an) application will be made for the approval of any future expansion,” he wrote. “Future development plans will be prepared and Cayuga County Health Department approval requested prior to construction.”

But instead of following the process required by law, the spent the next several years building building first and asking for permits later.

Over the past 17 years, Twin Oaks received seven letters from the state Department of Environmental Conservation (DEC) and the Cayuga County Health and Human Services Department asking the owners to correct wrongdoings, a review of records shows.

In a letter dated Dec. 11, 1995, the DEC told Rindfleisch the Cayuga County Health Department had inspected Twin Oaks three months earlier and discovered the campground was home 70 to 75 permanent sites, 42 more than the Rindfleisches were approved to host.

Four years and another letter later, Karl Rindfleisch was lightly admonished by the county’s health department for once again expanding his campground without permission.

The next year, the county’s Health and Human Services Department sent Rindfleisch a letter regarding the effects of his decision to expand without approval. Twin Oaks’ sewage disposal system (SDS), a public health sanitarian said, presented a problem.

In a letter dated May 26, 2000, Scott King warned Rindfleisch about potential problems.

“The expansion of the campground in recent years has created a situation whereby the SDS appears to be undersized for its current use,” King said. “If the current SDS should overflow to the ground surface, or fail in any way, we may require you to expand the system at the time.”

But according to a letter sent in 2007, the problem was not corrected.

In an Oct. 25 letter from the DEC, Valerie Ellis, an environmental engineer, informed Rindfleisch that although he only had a permit to have a subsurface discharge to support 30 people, an inspection of Twin Oaks revealed up to 100 units were connected to the property’s septic system.

“This is a violation of your permit,” Ellis wrote.

To amend the violation, Ellis told Rindfleisch an engineer needed to inspect Twin Oaks’ septic system and determine if it was capable of treating additional sewage. She also instructed Rindfleisch to modify and resubmit his permit to reflect the campground’s true population size and sanitary discharge flow during the camp’s busiest season.

If Rindfleisch did not follow the DEC’s directions, Ellis said Rindfleisch could face “further enforcement action.”

After 17 years of of expanding before obtaining approval, the brothers appeared to be taking a different path in 2007.

On Sept. 20 of that year, Andrew and Karl Rindfleisch sent a letter to Springport’s planning board formerly requesting a special use permit to once again expand the Twin Oaks Campground.

In the letter, the Rindfleisches explained they wished to add 27 new campsites to their campground, building the sites on about three acres on the northwest part of Twin Oaks’ grounds. The brothers said they planned to make the new additions “even more upscale” than existing sites by requiring campers to purchase new park models similar to small cottages.

Ending the letter, the brothers asked the town’s planning board to consider the “huge positive impact” the Rindfleisches said campers make each summer on Springport’s economy, arguing campers, campgrounds and marinas injected several million dollars worth of spending into the municipality’s economy.

“As we have talked to the business owners over the years, they have said that without the campers they could not survive,” the Rindfleisches wrote. “They all bemoan the end of the ‘summer people’ and the tough months in the winter without the summer people spending.”

Allowing tourism to flourish, the brothers wrote, was a “win-win” situation for Springport.

But the Fire Lane 14 neighbors did not see the expansion — an expansion that would march the trailers up to Brad and Mary Rindfleisch’s home — as a win. And so, through commissioning engineering renderings and aerial photographs, the neighbors prepared to fight the expansion.

Following a string of letters from the residents, Karl and Andrew Rindfleisch sent a letter to the members of Springport’s planning board responding to “a few of the concerns.”

“While change can be difficult, it is a natural part of life,” wrote the brothers. “We feel the neighbors’ concerns center more around a fear of change then anything factual.”

Aerial maps commissioned by the neighbors, along with Google Map satellite images, supported the claims.

Throughout the next month, the neighbors filed four additional complaints with the town, alleging Twin Oaks’ owners constructed a new bathhouse and created a man-made marina without first obtaining permits. They said the Rindfleisch brothers illegally removed natural barriers between the homes and the camp, creating both light and noise pollution.

Months later, the brothers were once again cited for violations.

In a letter dated March 9, 2009, Steve Downing, the town’s zoning officer, informed the Twin Oaks owners that three of its most recent expansions — placing campsites on Karl Rindfleisch’s residential property, expanding the campground without approval and erecting a commercial harbor and marina without first obtaining permits — were illegal.

“The town of Springport cannot allow this non-conforming use to continue without a special permit outlining the scope of this operation,” he wrote, giving the brothers a month to get their plans together. “Failure to correct this violation within time limit stated may result in appropriate legal action against you or your establishment as directed by law.”

But despite the violations and complaints, a solution was reached. The brothers were issued special permits, grandfathering in the additions to Twin Oaks under what the neighbors believed to be a clear, conditional agreement: the brothers were never to expand north of McIntosh Creek.

For more than two years, there was hesitant peace. But in February, the fight resumed.

In a Feb. 1 letter to the Springport town board and the town’s zoning officer, Karl Rindfleisch Jr. asked the board to grant him a permit for a special development district that would allow him to add 125 campsites and 25 boat hoists to Twin Oaks, expanding the campground past McIntosh Run — and right up to Brad and Mary Rindfleisch’s fence.

The neighbors were outraged the brothers broke their promises.

“They know the SUP did not allow them expansion,” Diana Rodriguez, also a member of the planning board, said. “That is a direct violation.”

She said she doubted the Rindfleisches ever intended to stick to the agreement.

Rindfleisch called the neighbors’ fears that Twin Oaks would continue to expand without getting approval “unfounded.” He said Twin Oaks had continuously expanded since its creation in 1989 with both the town’s and neighbors’ knowledge.

“Once the town asked us to get a special use permit, we did,” he said. “We followed the town rules all along, and we’ll continue to.”

If Twin Oaks were allowed to expand again, Rindfleisch said the town would receive a hearty economic boost — reported by the brothers as $685,000 — from the summer lodgers. And since the campground pays for sewer and water without using town services, he said the situation was a “win-win.”

“I think you’ve got to look at the whole issue,” he said. “I understand people have concerns, but you have to realize it’s for the greater good.”

From now until the Springport’s Sept. 10 board meeting, town residents are allowed to submit written comments regarding the proposed Twin Oaks’ expansion.

And although the Fire Lane 14 neighbors want the town board to decline the brothers’ request, they aren’t too hopeful.

Luis Rodriguez said the government’s lack of action to halt the violations was disappointing.

“I guess the most frustrating part is no one holds (them) to anything,” he said. “I retired from law enforcement. I don’t want to be policing my neighbors.”

“There has to be this accountability,” Eric Scott said. “This is not their kingdom.”

If the Rindfleisch brothers are given a green light on expanding the Twin Oaks Campground, the neighbors aren’t sure what they’ll do. The Rodriguezes and Scotts both said they’d consider moving — if they thought anyone would buy their homes.