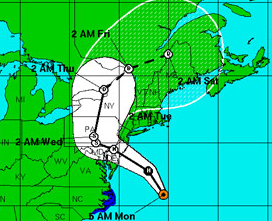 Hurricane Sandy bore down on the Eastern Seaboard’s largest cities today (Oct. 29), forcing the shutdown of mass transit, schools and financial markets, sending coastal residents fleeing, and threatening a dangerous mix of high winds, soaking rain and a surging wall of water up to 11 feet tall, the Associated Press reported.

Campgrounds were among the first to close in anticipation of the massive storm.

Sandy strengthened before dawn and stayed on a predicted path toward Washington, Baltimore, Philadelphia and New York — putting it on a collision course with two other weather systems that would create a superstorm with the potential for havoc over 800 miles from the East Coast to the Great Lakes. About 2 to 3 feet of snow were even forecast for mountainous parts of West Virginia.

The tempest could endanger up to 50 million people for days.

The center of the storm was positioned to come ashore tonight in New Jersey, meaning the worst of the surge could be in the northern part of that state and in New York City and on Long Island. Higher tides brought by a full moon compounded the threat to the metropolitan area of about 20 million people.

“This is the worst-case scenario,” said Louis Uccellini, environmental prediction chief for the National Oceanic and Atmospheric Administration.

As rain from the leading edges began to fall over the Northeast on Sunday, hundreds of thousands of people from Maryland to Connecticut were ordered to leave low-lying coastal areas, including 375,000 in lower Manhattan and other parts of New York City, 50,000 in Delaware and 30,000 in Atlantic City, N.J., where the city’s 12 casinos shut down for only the fourth time ever.

According to Park Service updates, Ocracoke Village on Cape Hatteras was flooded and without power aside from that generated by portable generators. “Overwash has occurred on NC-12 on Ocracoke, north of Hatteras Village, Frisco, Buxton and Rodanthe,” the agency added. “Moderate to major sound-side flooding is expected when the winds come around to the northwest.”

Just to the south at Cape Lookout National Seashore, 32 visitors were riding out on the storm on the seashore’s barrier islands. “All are secure,” the Park Service reported. “The park is keeping tabs on them.”

Here are some media reports from along the Coast:

From the Cape Gazette, Lewes, Del.:

All Delaware State Parks and DNREC Division of Fish & Wildlife facilities – including state wildlife areas – will close at 5 p.m. Sunday, Oct. 28 in anticipation of Hurricane/Tropical Storm Sandy’s projected path through and impact on the Mid-Atlantic region, including Delaware.

Division of Fish & Wildlife closures include duck blinds that are located in the wildlife areas. All wildlife areas, state boat ramps and fishing access areas will be closed until further notice.

Delaware State Parks likewise will be closed until further notice. Additionally, all Delaware State Parks campgrounds, cabins and cottages will close at 1 p.m. Sunday, the normal checkout time, and they too will remain shut until further notice. Anyone who had made reservations at the campgrounds, cabins or cottages for Sunday and beyond will receive refunds due to the storm-related closure, and will have been notified in advance by Parks’ reservation system.

The Maryland Park Service is closing all State Park campgrounds and day-use areas in preparation for the arrival of Hurricane Sandy. The Maryland Forestry Service is also closing Elk Neck State Forest.

The latest weather forecasts predict a significant impact to Assateague Island from Hurricane Sandy. The campground at Assateague State Park closed Saturday evening and will remain closed until the morning of October 31, depending on the severity of damage caused by the storm. The Assateague State Park day-use facility and the road onto the island (Route 611 prior to the Verrazano Bridge) will be closed to all visitors and traffic at 12:00 noon on Sunday and until further notice.

All Maryland State Park campgrounds and day-use areas, including picnic shelters and all other park facilities, will be closed by Sunday evening. State Parks will remain closed, and all park programs are canceled, until the morning of Oct. 31. This closure period will be modified on a park-by-park basis depending on the severity of the storm and associated damage.

Full refunds without cancellation penalties will be automatically processed for all reservations for the period during which the parks are closed.

The Department of Conservation and Recreation (DCR) is taking steps to prepare for the high winds and heavy rainfall that are predicted if Hurricane Sandy passes through the Commonwealth.

DCR closed its outdoor facilities statewide at dusk on Sunday. These facilities and properties are expected to remain closed for the duration of the storm.

Campers already at these campgrounds had to leave by 4 p.m. on Sunday and were required to take all camping equipment with them. Following the storm, DCR recommends visitors contact individual facilities prior to beginning their trip. Campers whose reservations are being canceled by DCR’s closure on Sunday will be given the opportunity to receive a full refund or the ability to transfer their reservations.