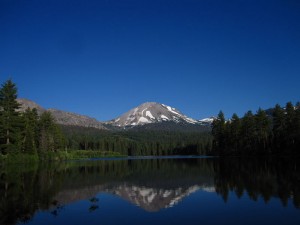 With the Fourth of July landing on Wednesday, public campgrounds in Northern California are bracing for back-to-back busy weekends, The Redding Record Searchlight reported.

Indications suggest Lassen and other areas will be bustling with campers this weekend and through the holiday.

“Looking at our reservations, this weekend will be the busier of the two,” McKelvey said. “A lot of the (campgrounds) are full this weekend and even through the week.”

Campers with reservations have claimed all sites for this weekend at McArthur-Burney Falls State Park near Burney and Oak Bottom Campground at Whiskeytown National Recreation Area, workers said.

“We are sold out except for maybe six sites that are available for Monday,” Brett Mizeur, supervising ranger at Burney Falls, said Wednesday. Mizeur, however, expected those sites to be spoken for soon.

Mizeur encouraged people coming up for just the day to visit the falls in morning or early evening to help traffic flow, especially on the weekends and on July Fourth.

“Sometimes we have had to close the park between noon and 4 p.m. to further entry because there is no parking,” Mizeur said.

AAA projects more than 4.8 million Californians will travel for the holiday, the most since 2003 and a 5 percent increase over 2011.

Most of those surveyed said they will start their holiday today.

The recent drop in gas prices has helped. The average for a gallon of unleaded gasoline in California on Thursday was $3.80, nearly 50 cents lower than the $4.28 price a month ago, AAA said.

Nationally, AAA forecasts just over 42 million people will travel 50 miles or more during the holiday, a 5 percent increase over last year.

For Lassen Park, conditions will be much different from a year ago.

For starters, the road through the park is open, marking the first time it has been clear of snow for the holiday since 2009. The park road opened June 1 this year.

“It’s just exciting,” park spokeswoman Karen Haner said. “It’s going to be a nice week. We hope people can take the time off for it.”

The trail up Lassen Peak and the Bumpass Hell Trail will be open, but Haner advised hikers to dress appropriately because there are still spots of snow on both trails.