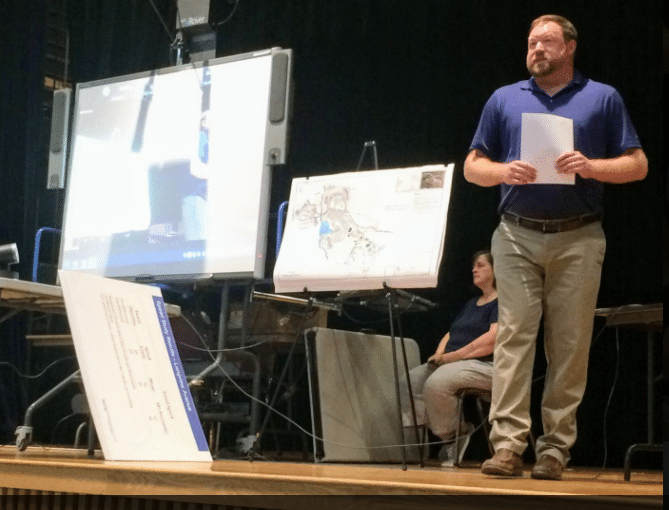 Brent M. White, a civil engineer with a Pittsfield, Mass., firm, briefs an audience Wednesday on plans for a recreational vehicle park in Hinsdale. It would be built on the grounds of the current Camp Emerson if granted a special permit and other needed approvals. LARRY PARNASS — THE BERKSHIRE EAGLE

The people behind a major Hinsdale, Mass., development say they can tuck 317 sites for RVs onto a summer camp property without messing up the neighborhood, according to The Berkshire Eagle.

But Hinsdale officials had questions this week about traffic, water supplies, sewer use, environmental harm and whether an influx of visitors would be simply too much for nearby Plunkett Lake.

Ninety minutes of discussion Wednesday, in the regional middle school auditorium, kicked off official reviews of Northgate Resort Ventures LLC’s plan to remake Camp Emerson into one of its nearly two dozen RV parks in 13 states. Along with dozens gathered in person, others watched the proceedings by videoconference.

Much lies ahead. The public gets a chance to comment at the Planning Board’s next meeting in mid-August. The Select Board will take a recommendation from planners and later decide, after a formal public hearing, whether to grant Northgate a special permit.

Over 90 minutes, Northgate representatives made the case that the RV park would not create traffic hazards or congestion, overwhelm the town’s sewer system or drain water resources. They said the RV sites would be placed at the middle and rear of the 155-acre property.

The current camp’s entry off Longview would be widened and positioned closer to the crest of a hill, to improve its visibility.

Chelsea Bossenbroek, Northgate’s general counsel, said her family-owned business knows what it’s doing. “We are very familiar with how to operate a campground,” she said.

In Hinsdale, she said the company would work to keep patrons busy within the site, without a lot of coming and going, and would instruct travelers to come to the property up Michaels Road off Route 8.

When asked whether Northgate would consider reducing the size of the project, Bossenbroek cited the need to make the venture work financially. “It models out really well,” she said of the proposed 317-site project.

Bossenbroek said that while some of the current camp’s more “rustic” bunkhouses will be removed, the project will seek to preserve elements. The camp boasts a central dining hall able to seat 400, built at a cost of a million dollars by the Lein family, as well as a heated swimming pool. “We don’t go in and just tear everything down,” she said.