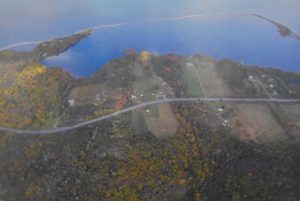 This aerial view of Big Pond Centre shows the “barachois” or coastal lagoon that defines the area.

Roy MacInnis stopped short of calling it a celebration, according to the Cape Breton Post.

The “it” that MacInnis referred to is a Nova Scotia Court of Appeal decision that appears to put an end to a Calgary-based developer’s plans to build an RV park and campground in the rural community of Big Pond Centre, about 40 kilometres west of Sydney on the south side of Bras d’Or Lake, Nova Scotia.

“The court dismissed the CBRM appeal so it is very good news and I guess you could say we won,” he said of the decision that was rendered Monday (Sept. 16) in a Halifax courtroom.

MacInnis is part of a group of Big Pond Centre residents that has spent the better part of the past two years fighting against the controversial development that was proposed for a large parcel of land adjacent to the farm that has been in his family for generations.

The issue began to garner public attention in early 2018 when developer Chris Skidmore made an application to the Cape Breton Regional Municipality council to amend its land use bylaw to allow for the RV park and campground. Then in March of last year, following extensive and heated debate, council voted 7-6 to amend the bylaw.

A multi-day hearing was held in Sydney in the summer of 2018. Then in January, the UARB tribunal that heard the appeal rendered its decision. It agreed with the appellant group, thus overturning the municipality’s decision.

End of the matter, right?

Not by a long shot.

The CBRM then filed a legal challenge of the UARB ruling before the Nova Scotia Court of Appeal. That matter was heard Monday when the court unanimously dismissed the appeal after about 30 minutes of testimony.

Afterwards, MacInnis and other opponents of the proposed RV development gathered in downtown Halifax restaurant to talk about the issue that took up so much of their time over the past couple of years.

“It should never have gone this far — the UARB made the right decision and we still don’t understand why the municipality wanted to appeal it,” said MacInnis, who reluctantly became the face of the RV park’s opposition movement.