NPS Announces It Will Allow The Use Of E-Bikes 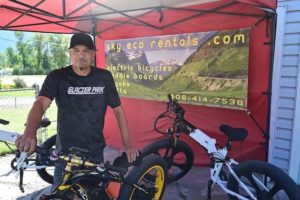 Ed Albrite with an e-bike at his bike rental business in Columbia Falls, Mont.

The National Park Service (NPS) on Thursday (Sept. 19) announced it would allow electric bikes in Montana’s Glacier National Park and other national parks on roads and trails where traditional bikes are allowed, according to the Daily Inter Lake.

This means Glacier National Park visitors will be able to use e-bikes when traveling Going-to-the-Sun Road and other roads in the park. By definition, e-bikes are electric bikes that have a one horsepower or less motor and typically don’t go faster than 28 mph with pedal assist.

In Glacier, for example, bicycles still have to abide by the speed limit on roads. Motor bikes with a throttle are not e-bikes, NPS officials clarified.

Biking the Sun Road when it’s closed to vehicle traffic is a popular activity in Glacier, particularly in the spring. Now people can legally use e-bikes on the road.

The new directive doesn’t allow e-bikes on trails that don’t already allow bicycles. Nearly every trail in Glacier is closed to bikes, save for the old Flathead Ranger Station Trail, which runs along the Middle Fork of the Flathead, the Fish Creek bike path from Fish Creek to Apgar and the bike path from Apgar Village to Apgar Campground.

But bikes are allowed on roads to Bowman and Kintla Lake, the Inside North Fork Road and paved roads, like Many Glacier, Two Medicine and Chief Mountain.

There are also biking restrictions during the summer months, when the Sun Road is open to vehicles.

Outdoor and conservation groups have objected to allowing e-bikes in parks without additional study or public notice. Public Employees for Environmental Responsibility contends the order allowing electric bicycles on park trails violates several federal laws, and the group threatened to sue any park that implements the order.