By: Woodall's Campground Management|Published on: May 22, 2020|Categories: Industry News| 0 comments 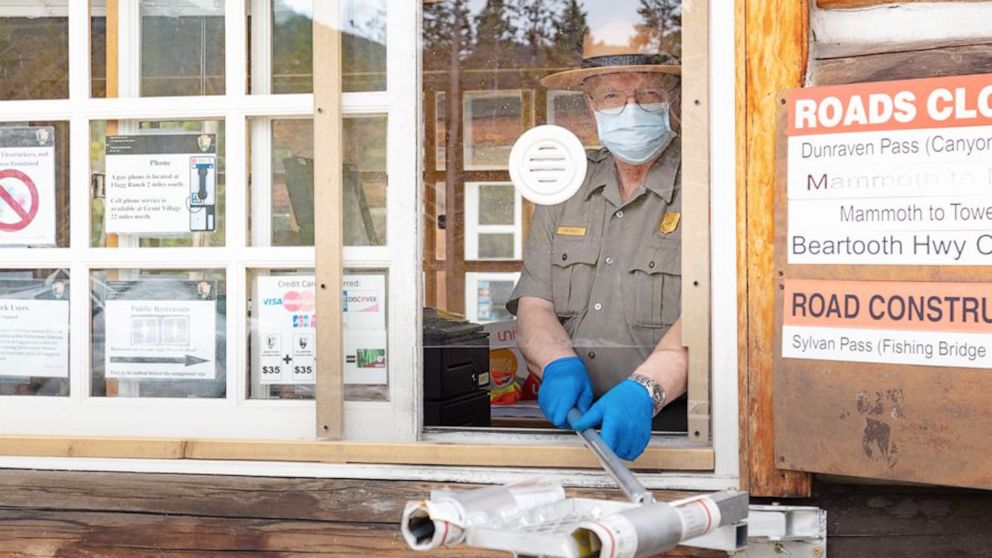 A park ranger with face mask and other precautions prepares to greet visitors at Yellowstone National Park ahead of Memorial Day weekend.

As the Memorial Day weekend approaches, the National Park Service (NPS) has begun reopening some big-name national parks closed during the COVID-19 pandemic, but advocates are raising concerns about crowds and limited staffing to enforce social distancing, according to ABC News.

Many of the more popular parks closed due to concerns about the spread of the virus or statewide stay-at-home orders even as the majority of the park service’s 419 properties have remained open with changes to some parts of the operation.

The agency says its evaluating how to begin reopening properties on a case-by-case basis as shelter-in-place orders are lifted and only when they’re able to maintain social distancing.

“We feel that we can play an important role in the moving forward picture. And I think a lot of people will be out utilizing us this summer,” Bernhardt said in an interview with ABC’s Aaron Katersky.

Advocates have raised concerns that it’s impossible for limited park staff to enforce social distancing everywhere in national parks and that potential crowds or out-of-state visitors could bring the virus to areas where health care facilities are limited.

“When people think about national parks, they picture wide open spaces. But accessing these spaces often requires walking through crowded parking lots, hiking trails and walkways alongside other people. Well-meaning park visitors may not be able to effectively physically distance in a national park during this time,” Theresa Pierno, president and CEO for the National Parks Conservation Association said in a statement.

“The Department of the Interior must put protocols and management tools in place and secure enough personal protective equipment for parks to safely operate without needlessly putting visitors and local communities in harm’s way. As we quickly approach Memorial Day weekend, one of the busiest times for national parks, we remain concerned about the ability of park staff and local and tribal communities to prepare for a potential influx of visitors.”

But Bernhardt said he’s encouraged by events like the Thunderbirds and Blue Angels flyover in Washington, D.C., earlier this month when he said visitors to the National Mall naturally spaced themselves out to respect social distancing in what he called “social clumping.”

“I’m frankly encouraged by this. And what I saw was what I’m gonna call clumping. And that’s not a scientific term,” he said.

“It’s my belief that groups of people have decided that that – they’re colleagues and maybe they’re a family member, maybe it’s a cohort of workers – but whatever it is, they’ve decided in some way that they are comfortable with social distancing with them in a very narrow space, so maybe like three feet. But. But what you saw is clumps, so like family units or groups that were together, and then space and then individual and space and another clump and space.”

The Centers for Disease Control recommends sticking to parks in your area and avoiding crowds where it may be difficult to maintain six feet of distance from others. The CDC also says to avoid going to parks if you feel sick or have symptoms of COVID-19, avoid playgrounds and be prepared with up-to-date information before your visit.

National Park Service spokesperson Alexandra Picavet said visitors should be prepared with any supplies they need and recognize that trash cans and restrooms may be less accessible than usual, and that now may not be the time to try a challenging hike for the first time.

“This is definitely a time to be cognizant of the fact that lower staffing in parks means emergency response could be delayed,” she said.

Picavet said the park service wants to be there for Americans who want to celebrate Memorial Day in a park or battlefield site, as well as those who want to mark the holiday from home without the concern of crowds.

“What we want to do is try and help people find their way of honoring people who have lost their lives in service to our nation which is what memorial day is about. That’s why we have really worked hard to try and find a way to help people continue to have that connection with our American history and what Memorial Day is about.”