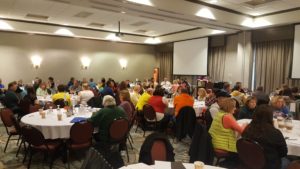 The OCOA conference featured round table discussions that allowed attendees to ask questions and gather feedback.

“We have changed the format over the years,” Kristy Smith, executive director of the OCOA, told Woodall’s Campground Management. “The conference is shorter now, so that our members don’t have to be away for so long. We also have a conference planning committee that works to implement more fun activities into the program.”

Held from March 2-3 at the Embassy Suites Columbus Airport in Columbus, Ohio, campground owners shared their experiences with other members, ate good food and were able to to peruse the services offered by 40 vendors during the conference’s trade show.

Keynote speaker Melinda Huntley, director of the Ohio Travel Association, relayed a bunch of statistics to campground owners in attendance, detailing how camping is very popular in the Buckeye state, but that there is still room to grow.

“You have to get out there and tell your story,” she said. “You have to persuade people that they can’t be too busy not to go camping.”

Huntley said that owners need to target Millennials, highlight walking trails near their campgrounds and local cultural venues, embrace digital marketing, and use pictures and video to tell their stories.

She also spoke on proposed Ohio Senate Bill 34, which would make the default start time for school districts in the state after Labor Day every year. There is a caveat that if a district holds a public meeting they could start school before Labor Day, something that concerns the tourism industry in the state. 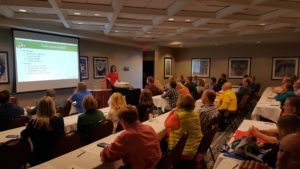 Amy Wirtz leads a session at the OCOA conference on succession planning.

Huntley pointed out that 58% of respondents to a recent survey have said they want longer summers, while 50% support starting the school year after Labor Day.

“Starting after Labor Day saves on energy costs and it allows families to spend more time together,” she said.

Other activities at the conference included “Fish Sticks”, which was designed to give practical tools to owners on how to create a positive work culture.

Amy Wirtz from Sheffield Village, Ohio-based Family & Business Success spoke on the importance of having succession plans in place that will protect your business if an emergency were to arise.