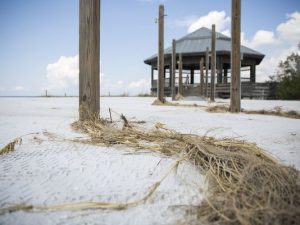 Hurricane Irma mangled Florida’s national and state parks, turning places meant to be enjoyed into disaster zones that could take weeks or longer to reopen.

According to the Naples Daily News, the U.S. National Park Service has sent some 380 workers from 95 national parks in 35 states to 15 parks in Irma’s path in Georgia, South Carolina, Florida and the Caribbean.

At Big Cypress National Preserve in eastern Collier County, crews have been clearing downed trees along Turner River Road, which had water too high to access for more than a week after the storm, Park Service Ranger Brett Everitt said.

Downed trees have made the preserve’s Bear Island campgrounds inaccessible and high water has shut down unpaved stretches of Loop Road, said Everitt, who is helping with Irma cleanup on loan from Gulf Islands National Seashore in Pensacola.

Everitt couldn’t provide a timeframe for reopening Big Cypress, but the park service reported a big step in that direction Friday (Sept. 22) with the restoration of power in Ochopee and the water plant coming back online. 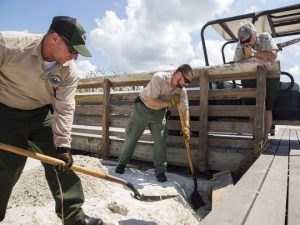 The preserve’s backcountry trails and campgrounds remain closed; hunting won’t be allowed until the park service and the Florida Fish and Wildlife Conservation Commission agree that it can be done safely. Rangers are patrolling the preserve.

Another southwest Florida natural gem, the Gulf Coast Visitor Center at the Everglades City entrance to Everglades National Park, could be closed for months with the winter tourist season on its way, Everitt said.

He reported “significant damage” to the visitor center, which houses the park’s boat tour concession, and to maintenance buildings, equipment and floating docks.

“Basically everything was impacted,” Everitt said.

Everglades City, which was devastated by a 10-foot storm surge that has left two-thirds of the town’s homes uninhabitable, serves as a popular point to access the Ten Thousand Islands and the park’s Wilderness Waterway.

“They’re pretty much dead in the water now,” Finefrock said. 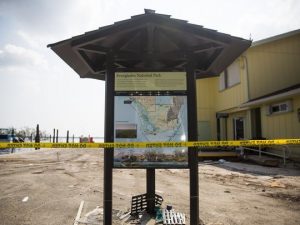 Finefrock said his group plans a fundraising campaign to pay for long-term recovery at the park and is recruiting dozens of volunteers to help with restoration work.

“We don’t know what that looks like yet, but we know enough that the parks are going to need some help,” Finefrock said.

Florida’s state parks also took a heavy hit from Irma; almost 140 state parks were closed after the storm. All but 31 of those parks have reopened.

“The way things were looking, I didn’t think there’d be anything when I came back,” Lovers Key Ranger Robert Steiger said last week as he toured the damage.

A skeleton crew cleared most of the park’s roads of debris; a contractor was expected to begin picking it up Friday. Steiger said the park could be closed for at least two weeks.

The park’s towering sea grapes weathered the worst of the storm, many of them snapping: “They’re big and old, and now they’re beat up,” Steiger said. 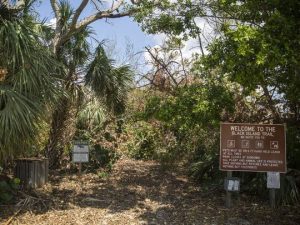 Storm surges took out a walking trail and buried parts of the tram station, and a park grill in sand pushed across the barrier island.

Fallen trees were a hallmark of Irma’s wrath, but at the Naples Preserve, the storm toppled a one-of-a-kind oak tree.

The storm snapped the trunk of the preserve’s champion myrtle oak tree, certified as the nation’s largest at 41 feet tall and 70 inches around, volunteer Ron Echols said.

Its demise returns the top honor to a myrtle oak at Crooked River State Park in Georgia.

“I’m sure they’ll be happy to get it back,” Echols said.