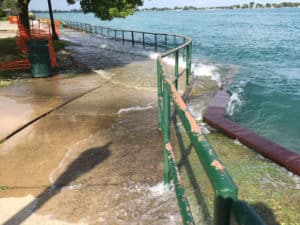 Waves of the St. Clair River curling over a seawall.

Tired of Lake Huron, the St. Clair River or Lake St. Clair lapping over your seawall, devouring your beach or eroding your waterfront property?

You may have to endure continued high water and even higher water into next year, according to The Voice.

That was one of the takeaways from a public forum on lake levels conducted by representatives of the U.S. Army Corps of Engineers, the National Oceanic and Atmospheric Administration (NCOAA), Michigan Department of Environment, Great Lakes and Energy and the University of Michigan in Port Huron on Sept. 5.

“This is a Great Lakes-wide issue,” said Keith Kompoltowicz, the chief watershed hydrologist for the USACE Detroit.

What will it take to bring water levels down?

The audience — more than 100 people in the Donald Dodge Auditorium in the St. Clair County Building — laughed, the kind of laugh that defines “gallows humor.”

Not that such weather patterns are unheard of — they characterized the falls through springs of 1976-1977 and 1998-1999. They generally characterized the 15-year period and contributed to the all-time record-low water levels for Lake Michigan and Lake Huron in January 2013.

Since that time, however, the weather has been wet. The lakes have risen six feet in the past six-plus years.

By January 2015, lake levels had experienced their largest 24-month rise in recorded history — the Corps’ data bank goes back a century to 1918.

June 2018 to May 2019 was the third wettest year on record for Michigan, said Rich Pollman, a meteorologist with NOAA’s National Weather Service in White Lake.