ARVC OHCE is Closing Out Today in Knoxville, Tenn. 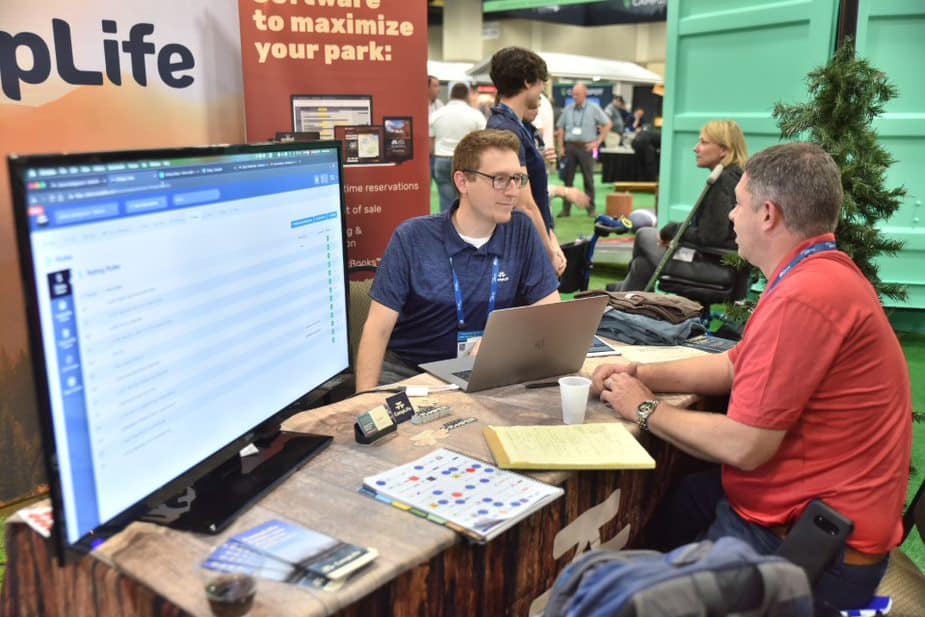 Camplife is one of many reservation systems providers that have booths at OHCE’s expo.

The Outdoor Hospitality Conference and Expo (OHCE) featured another full day of educational sessions on Wednesday (Nov. 6) as the event, hosted by the National Association of RV Parks and Campgrounds (ARVC), closes out today at the Knoxville Convention Center in Tennessee.

David Basler, vice president of membership and marketing for OHCE, told WOODALLSCM.com that the expo opened with 22% more vendors compared to the 2018 edition. In addition to the slate of workshops attendees heard from Toby O’Rourke, president and CEO of Kampgrounds of America Inc. (KOA), who spoke on trends in the RV park and campground sectors.

During a session entitled “How to Choose the Best New Amenity for Your Park,” Bud Styer, owner of consulting firm Bud Styers & Associates and several campgrounds, told attendees that they needed to gauge who their campers are and “build an experience that allows them to have fun, as well as allows owners to make some additional revenue.”

Styer went through a number of amenities offered at his parks and highlighted how he thinks “outside of the box” to transform activities into something campers won’t forget. “It is about creating something that campers are going to remember,” he said, “giving them a reason to come back and post the great time they are having on social media.”

Heather Blankenship, owner of the Yogi Bear’s Jellystone Park Camp-Resort in Pigeon Forge, Tenn., told attendees during her session entitled “How You Can Make More Money With Dynamic Pricing,” that her park grew 55% the first year she initiated the pricing strategy. “Not everybody’s going to have some crazy growth like that, but it is possible,” she explained.

Blankenship explained that dynamic pricing is the practice of varying the price for a product or service to reflect changing market conditions, including charging a higher price at the time of greater demand. Blankenship also told attendees that she began implementing locking fees and was surprised to see that she significantly increased revenue by allowing campers to lock in a particular site when they booked at her park.

“When our customers call, we tell them it’s no different than the hotel industry and the airlines that they are used to. The price of a site is going to change based on demand,” she explained.

Hundreds also attended a Reservation Systems Panel and Q&A that allowed attendees to hear from a variety of reservation systems providers in the RV park and campground space. Representatives from each company described the different features that will allow owners to not only save time, but make their operations more efficient.

The expo continues today from 8:30 a.m. to 4 p.m. as members will have the opportunity to vote for Area 1 and Area 5 representatives during ARVC’s annual membership meeting. ARVC’s “Awards of Excellence” dinner and the ARVC Foundation Auction are set to wrap up the conference later in the evening.

To learn more or to register for the conference, go to www.arvc.org.