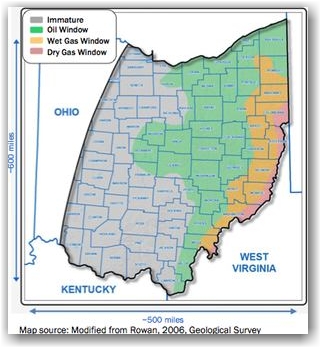 Colored areas mark region of eastern Ohio most likely to experience the demand for housing, such as in RV parks or "man camps," during the Utica shale formation oil and gas drilling boom. Map courtesy of www.energyindustryphotos.com.

With oil and natural gas exploration growing in Ohio, state and local officials are preparing for the possibility that “man camps” to house industry workers soon could dot the landscape.

Ohio agencies have not received any applications to date, but what has happened in other states experiencing an oil boom foreshadows a surge in new, temporary housing, the Akron Beacon Journal reported.

Man camps, as they have been dubbed, are typically a collection of recreational vehicles, mobile homes, or dormitory-style modular housing. The camps are home to hundreds of employees for months at a time while wells are being drilled in areas with limited hotels or rental-housing availability.

The Ohio Environmental Protection Agency and the Ohio Department of Health have released a 12-page document outlining rules on drinking water and wastewater from toilets, showers, sinks, and laundry facilities in dealing with such temporary housing. Camps must provide clean, potable drinking water and appropriate wastewater management under state and county health rules.

The document is intended to “clarify Ohio’s current regulations,” said EPA spokesman Mike Settles. “There are no new regulations tied to the guidance. There’s nothing dramatic here.”

The state’s document was developed “as a tool for drilling companies, entrepreneurs or other interested parties looking at providing temporary housing facilities for oil-gas field workers,” it says.

The document notes that the eastern half of Ohio sits atop the Utica shale formation that could be lucrative with natural gas, oil and so-called wet gases: ethane, butane, and propane. “There may be a similar increase in the need for temporary housing (‘man camps’) for field workers employed at the drill rigs,” the report says.

Settles said it is possible that such camps could be coming to Ohio “down the pike.”

Teresa Mills of the Buckeye Environmental Network and the Center for Health, Environment and Justice says she is troubled by the need for man camps.

Ohio has been told that drilling will create thousands of jobs, but the need for man camps indicates those jobs are not going to Ohioans, she said. “It’s job creation for whom?” she asked. “It’s a slap in the face for Ohioans.”

Such encampments can have a big impact on local communities and would be evidence of the massive numbers of out-of-state workers invading Ohio, she said.

The need for man camps “exposes the irony of creating local jobs in Ohio and it brings to light the fact the jobs won’t be local jobs,” she said.

Man camps have drawn mixed reactions in other drilling areas.

In North Dakota, the city of Williston passed an ordinance in April banning campers from parking within the city limits after an estimated 400 recreational vehicles crowded into the city. Officials said the campers, mostly single men, had become a nuisance.

Most paid landowners by the day or week and parked in Williston. The complaints started coming when clusters of recreational vehicles were parked in neighborhoods.

The ordinance provides for a $500 fine.

Three recreational vehicle parks are scheduled to open this summer in Williston. The city’s population has grown from 12,500 in 2008 to more than 20,000, largely because of the oil drilling.