Ohio Campers Get a Jump on the 2012 Season 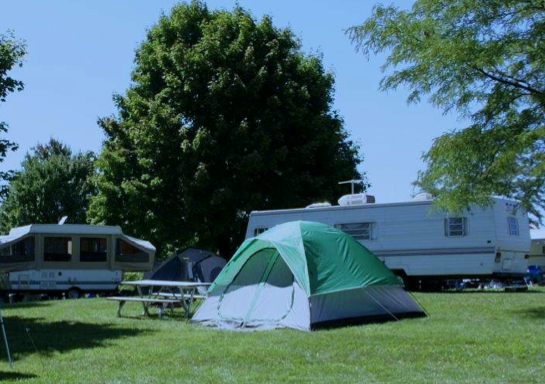 Cliff and Debbie Olson and friend Mike Harris sit before a crackling fire at Silver Springs Campground, almost nothing to obstruct their view of the green rolling landscape.

The facility opened for the season Friday night, earlier than many private campgrounds, so it will still be a few weeks before the trees get their leaves, schools adjourn, and more trailers and tents join them on this 49-acre retreat, the Akron Beacon Journal reported.

But the Olsons couldn’t wait. Mild though the winter was, they longed to get back outdoors — specifically here, their favorite getaway.

Silver Springs is the only campground owned by a municipality in Northeast Ohio. Park attendant Ken Barnhart said he’s been told there may be two other cities in the campground business somewhere in southern Ohio, but he’s never been able to identify them.

Stow purchased the property in the late 1960s when it was still farmland. The idea for the campground came about in 1976, Barnhart said, and “probably stemmed from the fact that (a park board member) was an avid camper and member of a camping club.”

Barnhart came on board three years later. His job with the city includes patrolling all 10 city parks, but in recent years he has made it his mission to spread the word about Silver Springs. His effort is working; more folks are finding their way to this inexpensive recreational gem.

While last year’s attendance dipped to 1,261 site rentals, thanks to the third rainiest year in the area’s history, the previous season set an all-time record with 1,721 rentals.

“We’re hoping for another season like that,” Barnhart said.

The sour economy can also take some credit, he said. Renting a lot is $10 a night for Stow residents and $12 a night for nonresidents, with the fee including up to six people.

“That’s 24 hours of entertainment for $2 a head,” Barnhart said.

The campground is “one step above primitive,” he noted. There is electricity, water spigots and portable toilets, but you won’t find a swimming pool, showers or a game room here.

Still, there will be weeks this year when the park is filled to capacity, with children flying kites or hitting baseballs on Groundhog Hill, anglers catching blue gill in Heritage Lake, and star-gazers slipping off to the parking lot of nearby Fishcreek Elementary, where astronomers set up their telescopes on clear Friday nights.

There are some organized events, including a spring fishing derby for youngsters and the annual Summer Sunset Blast featuring fireworks and live bands.

And occasionally, a camper will motivate others into action. Harris keeps track of when the International Space Station is flying overhead and gathers others on the open field to watch it cross above.

The park is also adjacent to the Metro Parks Bike and Hike Trail, which people will use to ride their bikes into town, grab a milkshake and ride back, Barnhart said.

The roomy lots allow families to bring along their own entertainment, Barnhart added.

“Every site is big enough to play badminton or corn hole,” he said.

For the Olsons, it’s enough to relax and watch nature pass by.

The Olsons started coming to Silver Springs because the backyard of their Cuyahoga Falls home was too small to enjoy the outdoors.

That first year they would pop a tent; the second year they bought a 19-foot Sportsmen Classic camper.

“This is the only place the camper has ever been,” Cliff said.

The campground is first-come/first-served, so the Olsons come early each weekend to nab their spot. They’re so attached to their corner of the campground, sometimes Cliff whips out a weed eater to give it some personal attention.

Their weekend may extend into weekdays, but that doesn’t bother Debbie, who is employed at Stow High School. She just goes to work from the campsite and returns here at the end of the day.

It beats going home to collect bills from the mailbox, Barnhart interjected.

The Olsons met Harris at Silver Springs and became fast friends. Harris is recovering from surgery and not ready to set up his own camp, but he drove from his home on Call Road along the park’s border to visit with the Olsons Friday night.

“You know how sometimes you don’t even know your own neighbors?” Harris said. “That can’t happen here. Everybody is so friendly.”

Barnhart explained that “everyone who comes here camping already has that one thing in common” so the conversations start easy enough and lead to other shared interests.

And those shared interests keep people coming back.

Barnhart said last year, a woman who had started coming to the park in the 1970s with her parents and grandparents and continued bringing her own children showed up with her first grandchild.

“That made it official. I have now seen five generations of campers come through,” Barnhart said.

Through the years, Barnhart has also noticed some trends. Fathers have often camped with their sons, but now it’s common to see single moms with their children in tow.

Another trend is toward Friday-night-only campers who leave after breakfast or lunch on Saturday. Busy lives and family commitments may keep some folks from lounging all weekend, but they still fight to squeeze in a little camping when they can, Barnhart said.

About 50 percent of campers are from Stow, a figure that once surprised Barnhart, who figured in a county as populated as Summit that there would be more out-of-towners.

“But Stow residents really support us,” he said.

For more information on the facility, visit the city of Stow website at http://www.stow.oh.us and follow the Parks and Recreation Department link to the campground.