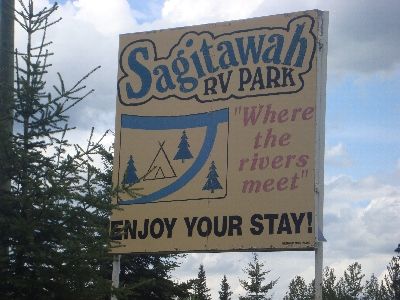 Management of the Sagitawah RV Park near Whitecourt, Alberta, received notice last week that their application to continue operations through the winter was denied, leaving many tenants confused about the situation, the Whitecourt Star reported.

The RV park has operated seasonally since it was issued a permit in 1991, with the exception of the winter of 1999-2000, when the Alliance Pipeline was being built.

This year, David Fraser, administrator for the park, applied to keep it open and received word in a letter from the town addressed Oct. 9 that due to “the remoteness of the campground from community support services, the inadequate services for fire protection, the seasonal access road, the flood hazard and ice-jam risk,” the council had decided against allowing the park to operate throughout the winter season.

The main concern is that the access road leading to the park is seasonal and is not maintained by the town during the winter, so should an emergency occur, getting emergency services in or evacuating the site would be difficult.

The town is located about 1 1/2 hours northwest of Edmonton.

Fraser said he had addressed the access road concern in a letter to the council, saying he had obtained the services of a third-party to ensure the access road is maintained and that the park would assume responsibility and liability.

However, Jennine Scheck, director of planning and development for the town of Whitecourt, said that despite this promise, ultimately the town is liable for the road.

Fraser said that he had dropped a letter off to the town on Oct. 15 saying the park would comply with the decision of the council. Later that day, he received a response stating that under the development permit, “no permanent residence shall be permitted, nor shall any use of the site before May 15 or after Oct. 15 of any year be permitted without council’s approval.”

The letter stated occupants must leave the park while conditions permit safe use of the access road and that all campers and recreational vehicles must be removed from the site before Oct. 22 or the town “may proceed to the issuance of a stop order and/or fines.”

Fraser said that although the town is within its rights to order the park closed, he would have liked to see more time granted and more discussion on where the tenants could go, saying the closest year-round parks with availability are in Stony Plain or Grande Prairie.

Jim Szell, a tenant at the park, said everyone at the park was bewildered when they received the notice.

“They’re working here because their living here. Everybody here supports the town. Where do you go with short notice like that? We just finished screwing things up for the winter.”

There was a lot of confusion among tenants because the park has stayed open year-round for years, even though it was not in accordance with the park’s permit.

“It would be nice to see someone from the town come and explain it to us.”

Jan Scherpen, another tenant, said it shows the town doesn’t want the oil industry around, with the blunt notice that was given.

“This place is full because housing is hard to come by around here,” he said. “We’ve come from Manitoba. We were told it would be open. Where are we supposed to go? Are you as a town council going to let us come stay in your basements?”

While Scherpen has a place to go because the company he’s contracted at is going to put him up in a hotel, he said he brought his trailer from Manitoba because he thought he could stay at the park.

“The town should reimburse me for the cost of storing it,” he said.

He also pointed to all the RVs with notices still taped to their doors.

Dave Harvey, who arrived from Saskatchewan just before getting the notice, was one of the lucky ones who was able to find a spot within the town, but was still furious.

“I should’ve been told right when I got here,” he said. He had just finished skirting his unit, when he had to take it all down again.

Mayor Trevor Thain said that the anger the tenants are feeling is misdirected.

“We were advised by the owner that when anybody stays there, they knew they had to vacate by Oct. 15,” said Thain.

Responding to questions regarding the likelihood of flooding occurring during the winter months, Thain said that it’s no guarantee.

”You can get a flood when the water starts to freeze, you can get an ice-jam, the comment was made that this can only happen every 17 years, but we don’t want to take that chance, especially after the flooding this summer.”

Scheck said that the park knew tenants were supposed to be removed by Oct. 15, so when the town heard people were still there on that date, they gave an extension until Oct. 22 to enable people enough time to move, but still within a reasonable time frame to ensure the access road would still be safe to use.

In regards to statements that the park has remained open in the winter for years, Scheck said that in her 2 1/2 years with the town, when they heard rumors the park was open, they called the manager and were assured that is was closed.

“Campers should have been notified right from get go that the permit was only good until Oct. 15,” said Scheck. “We do feel for them. It’s not our responsibility, but we have been making calls to neighboring municipalities trying to find available spots.