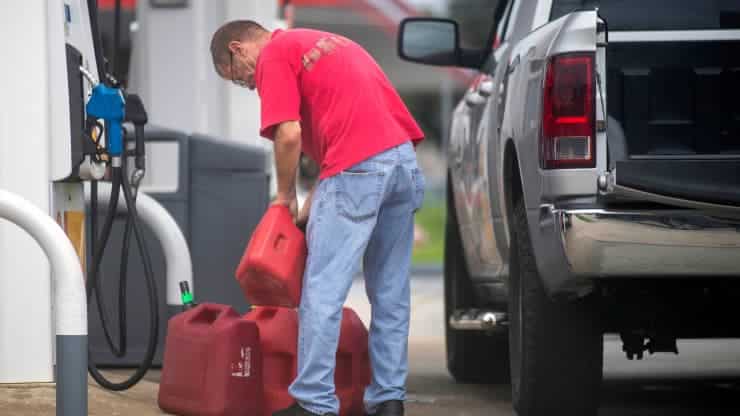 St. Bernard Parish residents fill up their cars and gas cans as the Louisiana coast prepares for the arrival of Hurricane Ida on Friday, Aug. 27, 2021, in New Orleans. Chris Granger | The Times-Picayune | The New Orleans Advocate via AP

Hurricane Ida temporarily shut down a critical swath of U.S. oil production and refining operations, and that should keep crude and retail gasoline prices at already elevated levels, according to CNBC.

Now a tropical storm, Ida swept across the Gulf of Mexico production area before slamming into the Louisiana coast Sunday as a Category 4 storm, bringing torrents of rain, high winds and high tides. More than 1 million Louisiana utility customers were without power early Monday.

The energy industry was working Monday to assess when it could restore refining operations across Louisiana and oil and gas production in the Gulf of Mexico, which were taken offline as a precautionary measure.

Oil prices were slightly higher Monday after jumping 10% last week. However, West Texas Intermediate futures — which traded at about $69 per barrel — are still down over 6.5% for the month. Nearly all Gulf of Mexico oil production was shut-in, accounting for about 15% of the U.S. total.

“The reaction is mixed because we avoided the worst-case scenario,” Again Capital John Kilduff said. “But supplies are tight, and that could impact prices, especially since we are moving into the peak period for storms, and weather worries are going to persist around the market for the next several weeks. As for supply, the cupboard was kind of bare going into this.”

The shut-in operations in the Gulf of Mexico should resume to normal if no damage is found. The hit to supplies from the hurricane comes as OPEC+ meets this week.

OPEC+ is widely expected to restore the 400,000 barrels a day of production it had previously committed to return to the market. The Biden administration had asked Saudi Arabia and OPEC for more supply to be restored.

But the cartel and its associates, like Russia, are expected to restore only the planned amount of oil to the market. “They’re not coming to rescue us from $70 oil,” Kilduff said.